Posted in Latest news from ABC Friends on 02 February 2021

Posted in Latest news from ABC Friends on 02 February 2021

ABC Friends was first established as ‘Friends of the ABC’ in the 1970s and since then, State based groups have periodically rallied to protect the ABC from funding cuts and political interference. 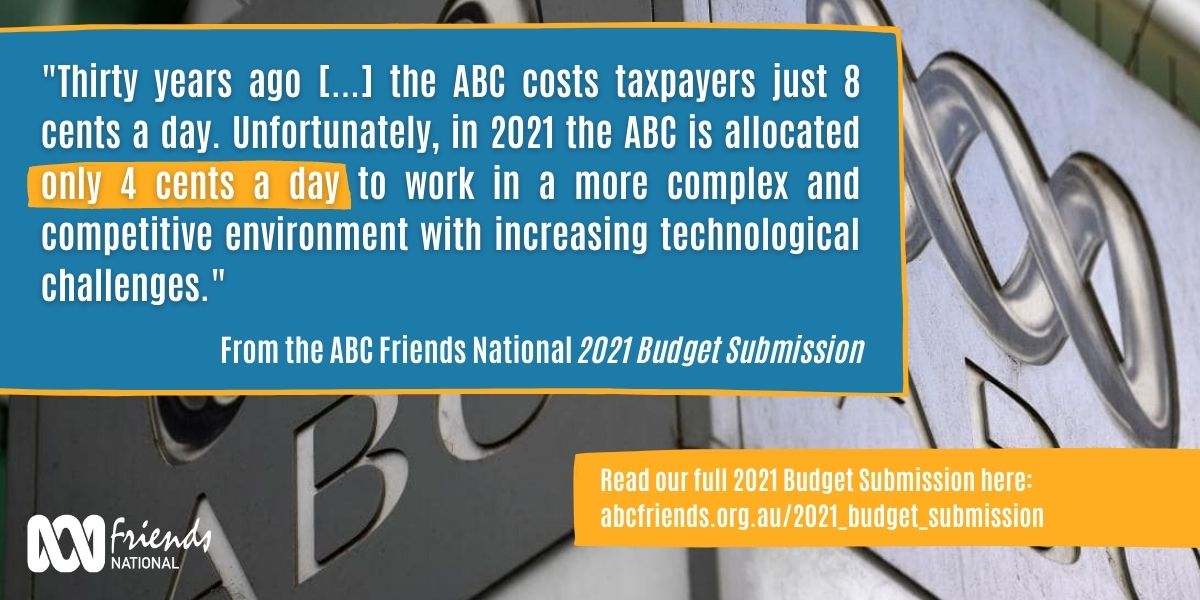 In 2015, a small group of ABC Friends from all states and territories began working to establish a national entity and, in May 2017, registered with the Australian Charities and Not for Profit Commission to provide a focus for advocacy and communication to defend the ABC.

ABC Friends National has campaigned through local state branches and social media to alert the community to various ways in which Australian public broadcasting is being undermined.

In July 2019, ABC Friends National established a comprehensive database of members andsupporters which has grown from 4,500 to 16,600. During the last twelve months we have initiated three major campaigns: Defend Media Freedom; National Emergency Broadcasting; and Restoration of ABC Funding.

We have liaised with Ministers and the Parliamentary ABC Friends group to ensure that national policymakers are familiar with key issues affecting the ABC as an essential service for all Australians.

We also regularly submit to parliamentary inquiries and provided detailed results of our 2020 Community Survey of Bushfire Affected Communities to the Royal Commission into National Natural Disaster Arrangements.

Given earlier assurances of “No Cuts to the ABC”, the ongoing 10% reduction in ABC funding since 2014 has resulted in a major loss of 1,000 professional staff; so the announcement, on June 24 2020, of 250 staff retrenchments and further cutbacks to services and programs was very disturbing.

ABC Board Chair, Ita Buttrose, has corrected ongoing claims that ABC funding has increased every year. The Managing Director of the ABC, David Anderson, has clearly detailed the impact of ongoing funding reduction which has resulted in the ABC receiving half as much funding as it did in the mid 1990s .... now just 0.2% of the Federal Budget compared with 0.4%.

The release of the ABC Five Year Plan demonstrates that the public broadcaster is being forced to cut services and reduce Australian content, therefore putting in jeopardy full implementation of the ABC Charter.

The October Budget 2020 did not contain any recognition of the ABC’s outstanding community service during the bushfires and COVID 19, and projected funding figures in the Budget papers show an ongoing decline in funds allocated to the national public broadcaster.

A Roy Morgan Survey in April 2020 revealed that 75% of Australians oppose further cuts to the ABC and 49% believe it should get more Federal Government funding, while less than 10% consider ABC funding should be cut.

ABC Friends National recommends that the Federal Government restores the ABC Budget to 0.4% of the Federal Budget, which was the level allocated in the 1990s, whereas it is currently only 0.2%.

This recommendation is based on the funding shortfall of $783 million between 2014 and 2022. This includes an $84 million funding reduction (indexation freeze) over three years from July 2020.

In addition to the restoration of ABC funding, we request an end to the indexation freeze. While public broadcasting funding is being reduced, there is an ad hoc approach to funding the commercial media sector. The ACCC has recommended grants for journalism be administered at arm’s length from government to avoid political influence.

The October Senate Estimates process revealed a lack of transparency in the process granting $10 million to Foxtel as part of a COVID Response Package, this being in addition to an earlier grant of $30 million. Similarly, there is limited publicly available detail about a 12-month waiver on Spectrum Tax for certain commercial broadcasters.

The competitive tendering details for the Public Interest News Gathering Fund of $55 million are not publicised.

We consider that the following areas must be prioritised when the Federal Government considers the ABC Budget for 2021:

Furthermore, we recommend that there must be a clear Federal Government commitment to forward planning through five-year budgetary cycles so that the ABC is politically independent and funded in the national interest.

We respectfully request that the Federal Government reassesses its funding responsibility to national public broadcasting. The ABC is an essential service for all Australians and is a major institution in maintaining our democratic traditions. When compared with other comparable countries, the funding of Australian public broadcasting is poor and declining.

It is not unreasonable to ask how Parliament House, the centre of our democracy, would respond to a 10% reduction in funding? How many parliamentary support staff would be retrenched? Could the business of Parliament be maintained at a high level in that circumstance? What impact would such a funding cut have on the way our government and parliament functions?

Thirty years ago, then ABC Managing Director David Hill reminded us that the ABC costs taxpayers just 8 cents a day. Unfortunately, in 2021 the ABC is allocated only 4 cents a day to work in a more complex and competitive environment with increasing technological challenges.

Clearly it is time for the Federal Government to recommit to Australian public broadcasting and to plan for sustainable ABC budgets that meet international standards.

Thank you for the opportunity to submit our views to the 2021 Pre-Budget process.

A copy of ABC Friends National 2021 Budget Submission can be downloaded here.