Posted in Latest news from ABC Friends on 19 December 2022

Posted in Latest news from ABC Friends on 19 December 2022 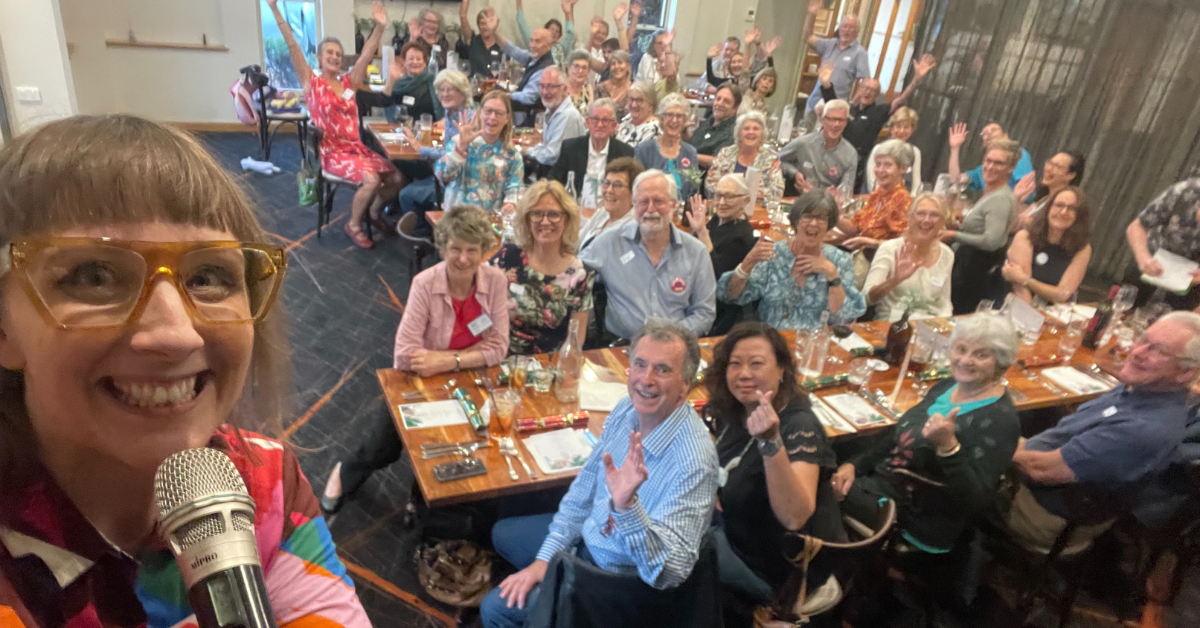 Some fifty members and supporters attended the dinner at the Herdsman Tavern in Wembley on 28 November. The Herdy team had set the tables nicely in a separate room, adding Christmas crackers on their own initiative. Places had been reserved for Committee members at each of the tables, but the other guests spread themselves around, which seemed to work very well, judging by the noise level!

Christine Layton and her husband and little daughter arrived promptly at 6.30 but Ian and Bonnie soon retreated to a play area nearby. Christine delighted us by going around the tables talking to our members and supporters – she said she was gathering ideas for her program Afternoons on ABC Radio Perth!

Christine described how she came to her current position as presenter of Afternoons at ABC Radio Perth. It began when she took on a job as public affairs co-ordinator at Main Roads Traffic Operations Centre. In her role she was almost always on the PM shift, which involved giving live traffic reports for 6PR, 94.5, Noongar FM and ABC Radio Perth. Russell Woolf was on the Drive shift, and he proved central to her move to the ABC. He would always include her in his talkback topic. His producers Leonie Harris and Patti Brook would prep her and get her ready.

An opportunity arose when the ABC Radio Perth Mornings producer, Bryce Green, who worked for the Mornings presenter Geoff Hutchinson, left the ABC to work as content director at Sonshine FM (a Christian community radio station). Bryce Green offered her their Breakfast spot as co-host with the chaplain for the West Coast Eagles, Paul Morrison. Main Roads gave her a year’s Leave-Without-Pay to try radio out, saying they would be happy to have her back if it did not work out; but being a broadcaster worked for her and she resigned from Main Roads 12 months later.

In the three years Christine did the Breakfast program at Sonshine FM and then went solo on their Drive program, she did a lot of outside broadcasts, including the opening of Elizabeth Quay, Perth Wildcats games, the Royal Show and many primary schools.

In her desire to get back to the ABC she eventually contacted Leonie Harris (by now Regional Editor), who advised her to apply for a job in the regions. She first applied for a role in Broome but did not get it. Six months later Leonie called and offered her a presenting role in Albany for ABC Great Southern, where she would be mentored by the journalist and chief-of-staff Andrew Collins. She said yes, and two weeks later she and Ian moved, her new husband getting a job at Albany Hospital.

Christine loved her presenting role in Albany and the environment there; and she had the opportunity to present and produce state-wide and national programs. It helped that the radio ratings were outstanding, with the ABC dominating in the Wheatbelt and the Great Southern. But after three years she moved back to Perth for the birth of her daughter Bonnie, for more family support.

Just four months later, ABC Perth's Local Manager, Sarah Knight, offered her the Saturday Breakfast slot, which was a part-time presenting role. She asked to be mentored by Geoff Hutchinson, who is now retiring [the day after our dinner]. Russell Woolf took her under his wing and Eoin Cameron helped out as well. As presenter for the Saturday Breakfast program, she started WA’s first regular mental health segment ‘Inside Out’. This program was a finalist in the WA Mental Health Awards for two years in succession (2019 and 2020).

In 2021 she became the presenter for the Afternoons program, which is her current role.

Christine thanked the ABC Friends for their support of the public broadcaster. Her enthusiasm for her job was a pleasure to see. She and her husband and daughter then left, before eating their dinner (!), which was a shame as the dinner was excellent. The Herdsman Tavern kitchen did a great job, and the rest of the evening progressed smoothly.