ABC Friends Tasmania is holding a lunch event to highlight the issue of Media Freedom.

The event will celebrate the life and work of publisher Andrew Bent (1790-1851). Andrew Bent was Australia’s first fighter for press freedom and the first newspaperman to be jailed for libel. Bent was transported to Hobart Town in 1812, became Government Printer in 1815 and began the Hobart Town Gazette the following year. On 4 June 1824, Bent sacked the official editor and censor of the Gazette and became the first publisher to conduct a truly independent Australian newspaper. Lieutenant Governor George Arthur jailed Bent twice for criminal libel and again for breaching a press licensing law, known as Bent’s Act because it was so targeted. Bent’s Act was later held by the British authorities to be repugnant to the laws of England.

The day will open with a telling of Bent’s story by Bert Spinks. Bert is a storyteller, writer, poet and bushwalking guide. His work focuses on exploring the overlapping stories in various places, observing how history, landscape and imagination meet.

Before lunch, we will hear from Ita Buttrose AC, OBE, Chair of the Australian Broadcasting Corporation (ABC). During her distinguished media career, she has held executive and editing roles for major Australian media companies including Australian Consolidated Press, News Ltd and Fairfax, and has run her own media company, Capricorn Publishing.

She has served on the boards of Australian Consolidated Press, News Corp Australia, and Television & Telecasters Pty Ltd. (Network TEN).  She has worked in print, radio and television and has written 11 books. She was inducted into the Australian Media Hall of Fame in 2017.

Ita is a founding member and former president of Chief Executive Women. She served as National President of Alzheimer’s (now Dementia) Australia from 2011- 2014 and is now the organisation’s National Ambassador. She has been Patron of the Macular Disease Foundation since 2005 and is Emeritus Director of Arthritis Australia, having served as President from 2003-2006.

After lunch, we have a great line-up of local musicians.

Ben Salter is one of the most highly regarded songwriters and performers that you’ve never heard of. Possessed of an immense and affecting voice, along with an esoteric and unique musical vision, Salter’s recorded output plots a course through indie rock, acoustic folk, electronica, jazz and the avant garde, stopping at all points in between. He is currently an artist in residence at the Museum of Old & New Art in Hobart, Tasmania, where he spends his days writing, recording, performing and collaborating.

Emily Sheppard explores the extremities of violin and viola playing. Written in the depths of caves, in blackened forests and on mountain summits, her music evokes landscapes, imagined and real. A haunting and emotive deep listening experience.

Georgia Shine is a classically trained cellist gone rogue. Improviser, dancer and singer, she takes inspiration from a vast landscape of influences that sculpt her unique sound and approach to music. She intuitively weaves her voice with the cello's to create raw and moving sonorous experiences for the listener.

Michael Fortescue played the double bass in the Tasmanian Symphony Orchestra between 1976 and 2013. He has also performed with a wide range of solo and small ensemble music in many music styles, particularly free improvisation and text-based performance. He has been a teacher of double bass and lecturer in improvised music at the Tasmanian Conservatorium of Music, and is currently Chair of Kickstart Community Arts. 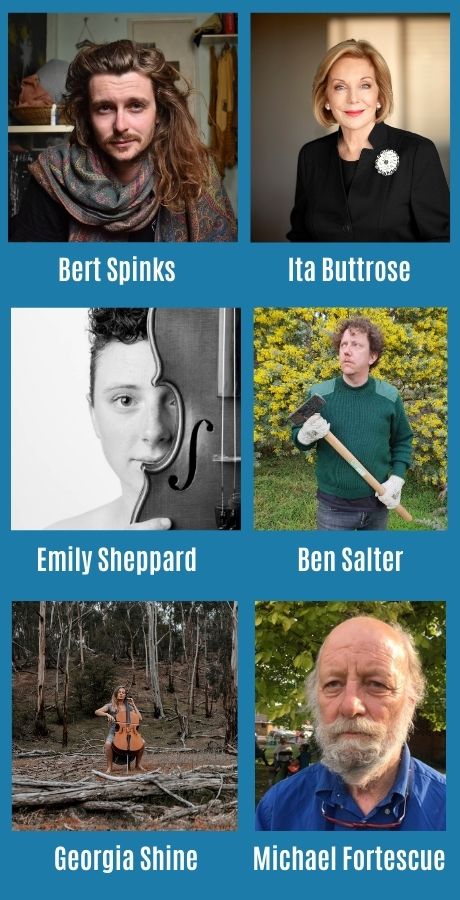