Aunty’s future is in your hands

Posted in Latest news from ABC Friends on 15 November 2020

Aunty’s future is in your hands

Posted in Latest news from ABC Friends on 15 November 2020

I want to tell you about my ‘Aunty’. In fact, she’s a Great Aunt. She’s 88 years old and still going strong.

Despite weathering debilitating cuts to her personal finances over the last decade, the community has rallied behind her. When I was younger, I would come home from school every day and she’d be there to welcome me. She’d entertain me with songs and stories and sometimes her friends would come to visit. Their names were Big Ted, Little Ted and Jemima. As a teenager, she began to educate me on the nuances of Australian society and politics and regale me with tales of far off lands. She shaped me into an engaged and educated citizen of the world, so it was no surprise when I grew up and flew the coop, living abroad for five years. But when the pandemic hit, I craved the familiar and comforting arms of my Aunty, who welcomed me home, just as she did when I was a child. She shared uniquely Australian stories that renewed my sense of national pride. I knew I was home. Some would even go as far as to call her a national treasure. Come to think of it, you might know her. She’s not just my Aunty, she belongs to all of us; she’s ‘Your ABC’.

The federal budget is set to be handed down on Tuesday, October 6th. By the end of the Coalition government’s third triennial funding period in 2022, the ABC will have lost over $783 million in available funding, over the course of an eight year period, according to a recent report by independent think tank, Per Capita.

While the ABC has had to make economies over recent years in response to funding cuts, with some painful internal nipping and tucking, these changes have managed to go largely unnoticed by much of the public. However, the severity of ongoing cuts means that changes are already being felt externally. Just last week, the flagship 7.45am radio news bulletin was axed. 250 jobs are on the chopping block, the ABC Comedy channel will face its final curtain and fewer episodes of Australian Story, Foreign Correspondent and Four Corners will be produced.

Between natural disasters, global pandemics and shifting diplomatic relations, the ABC has more responsibility than ever to bring us quality and timely news. They have stepped up to the plate remarkably during an incredibly difficult time for all Australians, but we cannot expect our public broadcaster to continue to do more with less. The government has attempted to continually weaken the ABC’s ability to fulfil its duty to the Australian public and it is time to stand up and say that we will not accept our public broadcaster to be taken from us.

Let’s discuss the ABC’s three core functions; to inform, to entertain and to educate.

The ABC is the nation’s most trusted news source. Each week, 71 per cent of Australians consume ABC content. While media is a constantly changing landscape with shifting goalposts and the rise of social media has sped up audience fragmentation, this has created a unique space for the ABC to thrive by providing Australia with impartial and ethical news journalism and a guarantee to be a beacon of quality and independence. 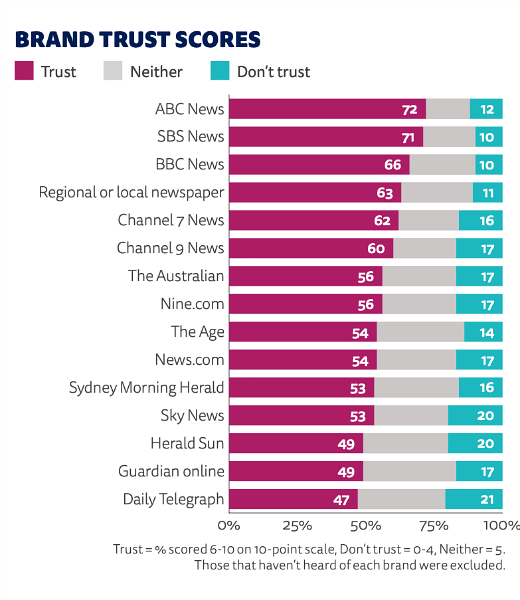 Public trust in the ABC has consistently been shown across multiple studies. A Roy Morgan survey conducted in 2019, shows that while a whopping 44% of Australians distrust social media, only 7% of respondents distrust the ABC. Similarly, according to Reuters Institute’s Digital News Report 2020, 72% of people surveyed trust the ABC.

Perhaps even more illuminating is that in 2018, when polled regarding trust in public institutions, the ABC was the fourth most trusted institution in Australia, following the Federal Police, the State Police and The High Court. It polled slightly higher than the Reserve Bank and Charitable Organisations and significantly higher than State Parliament, Federal Parliament, Religious Organisations and Political Parties, as evidenced below. 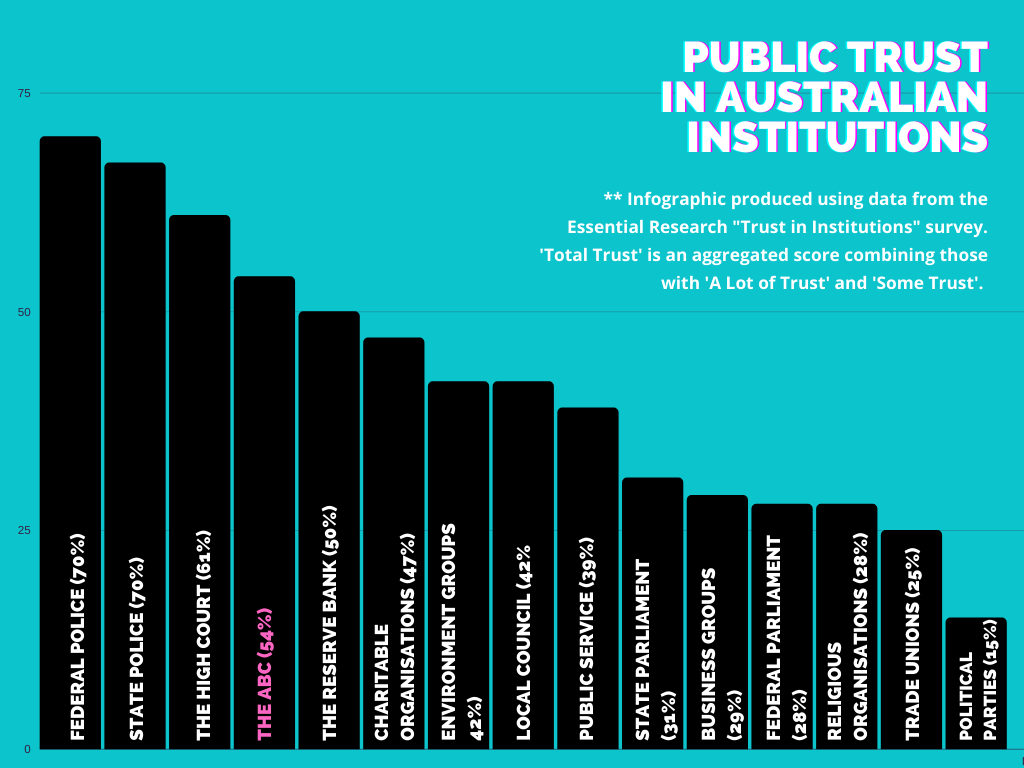 It’s easy to get caught up in mourning the loss of funding to ABC’s news coverage, but it’s not just news-gathering capabilities that are at stake. The ABC is an incredible source of entertainment. Much of this entertainment is made and funded by the ABC specifically for Australian audiences, by Australian cast and crew members, reflecting Australia’s unique society and showcasing Australian stories.

According to government figures, Australia’s creative and cultural industries contribute more than $111 billion to the economy every year. That’s 6.4 per cent of GDP. 600,000 people are employed in these industries, which equates to 5.5 per cent of the workforce.

Under section 1c of the ABC’s Charter the ABC is obliged to:

“Encourage and promote the musical, dramatic and other performing arts in Australia.”

This obligation has become increasingly hard to uphold in recent years, with the ABC forced to cut the number of hours of original scripted Australian content by half.

“This decline in original Australian scripted content has had a significant impact not just on audiences, who struggle to find Australian stories in the increasingly internationalised, multi-platform commercial content offerings available to them, but on Australia’s once-thriving independent production sector, which is suffering the loss of significant co-production investment by the national broadcaster”, — Per Capita Report, ‘It’s Our ABC’

The arts is a precarious industry. Many people working within the film and television industries live transient existences, freelancing and picking up intermittent work. This has been exacerbated by the pandemic, with many production schedules being cancelled or thrown into chaos. This is an industry already experiencing huge challenges. Cuts to the ABC will further hamper efforts to get back on their feet and resurrect their industry and livelihoods after the pandemic. This includes not only those in front of the camera, but all those behind the scenes, including directors, writers, producers, camera operators, makeup artists, editors, costume designers and many more who rely on making Australian content for Australian audiences.

At its best, art reflects society back on itself. Indeed, a scary thought for power brokers intent on sowing seeds of division, rather than unifying our diverse nation. The ABC’s contribution to supporting talented artists and creators who seek to reflect and shape Australia’s rich social fabric must be commended and continue to be appropriately funded.

ABC has long been the home for trusted educational programming for young Australians.

In case we had forgotten this, the onset of the COVID-19 crisis served us up a dose of reality. In an unprecedented turn, forced school closures left parents and children undertaking the difficult task of schooling from home.

The ABC immediately stepped up its online and TV-based educational programming for children, tying it in with the school curriculum. When there weren’t many certainties in our lives, the ABC was there to fill in the cracks.

Not only, but especially during crises, I want to be guaranteed a strong and reliable public broadcaster. I want my future children to grow up with an ABC that educates them about our country and our world; that entertains and enthrals them and reflects society back to us so we can make informed decisions about our collective future.

For 88 years, our Aunty has served to weave us together as a nation by providing information, entertainment and education.

We, the Australian public, should not have to beg for an adequately funded ABC. A robust independent public broadcaster is a cornerstone of democracy and has become an especially important tool in this age of disinformation, to fight against the erosion of that democracy.

The ABC has become a political football over the years, but this is not a political issue. Its strength and quality of output should not be dependent on which side of politics wins power. Leaders who are on the side of their people have nothing to fear from a broadcaster tasked with acting on behalf of all Australians.

While we buy hundreds of billions of dollars of arms to protect ourselves from potential foreign threats, we’re systematically eroding our power and unity from within by derailing our independent public media.

There are billions of people around the world who can only dream of having an strong public broadcaster, instead of government controlled or privately owned media pushing a specific agenda. We have that.

We must wake up, because if we allow the ABC to be taken from us through sheer complacency, in 10 or 20 years we’ll wake up in a new world. Those we thought were acting in our interests will have slipped us into a pot of water and gradually turned up the heat until we’re desensitised enough to not realise what’s happening.

The ABC is a public institution. It belongs to all of us and its future is in our hands. Our treasured ‘Aunty’ is too precious to lose.

What can I do?

This article was written by Grace McCallum and was originally published on the Public Media Alliance website and reproduced with permission of the author.