Hell has no fury when the Liberal heartland is betrayed

Posted in Latest news from ABC Friends on 07 September 2020

Hell has no fury when the Liberal heartland is betrayed

Posted in Latest news from ABC Friends on 07 September 2020

Northern Sydney residents have called on Bradfield MP and Minister for Communications, Cyber Safety and the Arts, Paul Fletcher, to reverse the cuts to the ABC’s budget in the upcoming 2020-21 Federal Budget. 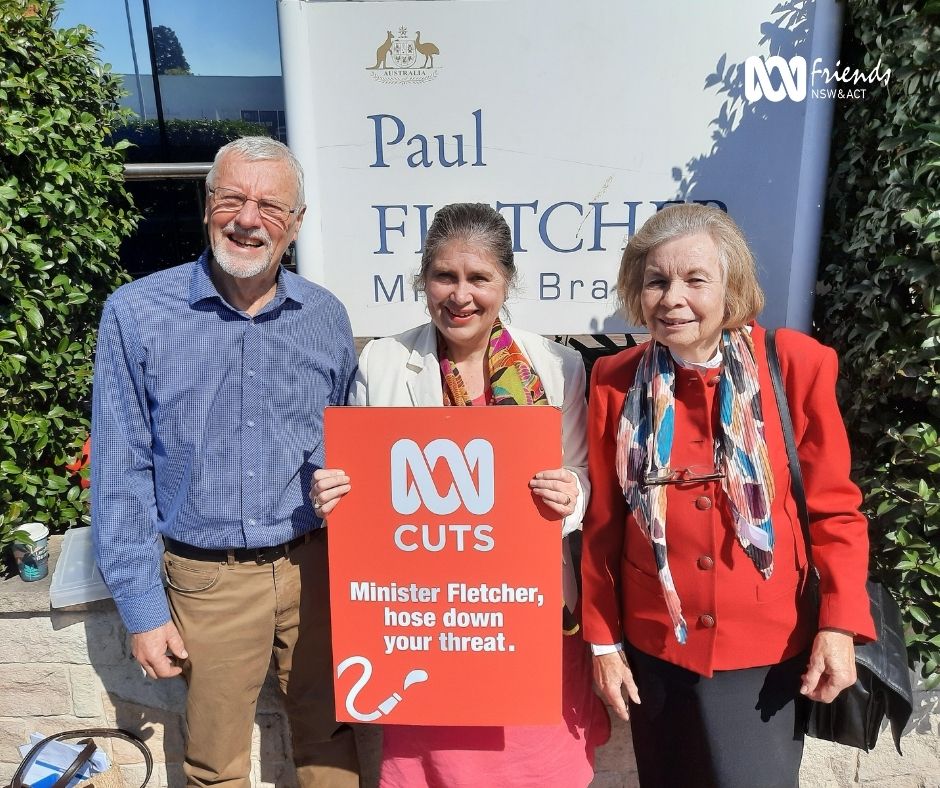 “If a Roy Morgan survey finds the majority of Australians reject the funding cuts to the ABC, then it is clear that Mr Fletcher’s constituents overwhelmingly oppose the cuts as well,” said Janine Kitson, ABC Friends Northern Suburbs of Sydney Convenor, and former Ku-ring-gai Councillor.

“We fear that Mr Fletcher is determined to inflict further budget cuts on the ABC when the Federal Budget is released on 6 October, 2020.”

“How can the Minister say that there have been no cuts to the ABC’s budget, when the ABC was forced to axe up to 250 jobs and cut programs in response to the $84 million budget cuts that came into effect in June, 2020?” asked Lindsay Somerville, ABC Friends Northern Suburbs of Sydney Committee member and Bradfield resident.

“Mr Fletcher also fails to acknowledge the fact that successive governments have made cuts to the ABC."

“Despite our many requests for a face-to-face meeting, Mr Fletcher as Minister for Communications seems to avoid communicating with his Bradfield constituents,” said Kate Reid, ABC Friends Northern Suburbs of Sydney Committee member, Justice of the Peace, and former ABC publicity manager.

“Mr Fletcher says he opposes the privatisation of the ABC, but where was he when the Liberal Federal Council resolved to privatise the ABC in 2018? Why does he continue to give handouts to the commercial media?”

“Mr Fletcher ignores, at his peril, his obligation to represent his Bradfield electorate who overwhelmingly support the ABC. Bradfield residents will not give up this fight to defend the ABC.  Hell has no fury when the Liberal heartland is betrayed” concluded Janine Kitson.