ABC Friends National President Margaret Reynolds has written about the selection of Ita Buttrose as ABC Chairwoman in the Pearls and Irritations blog. 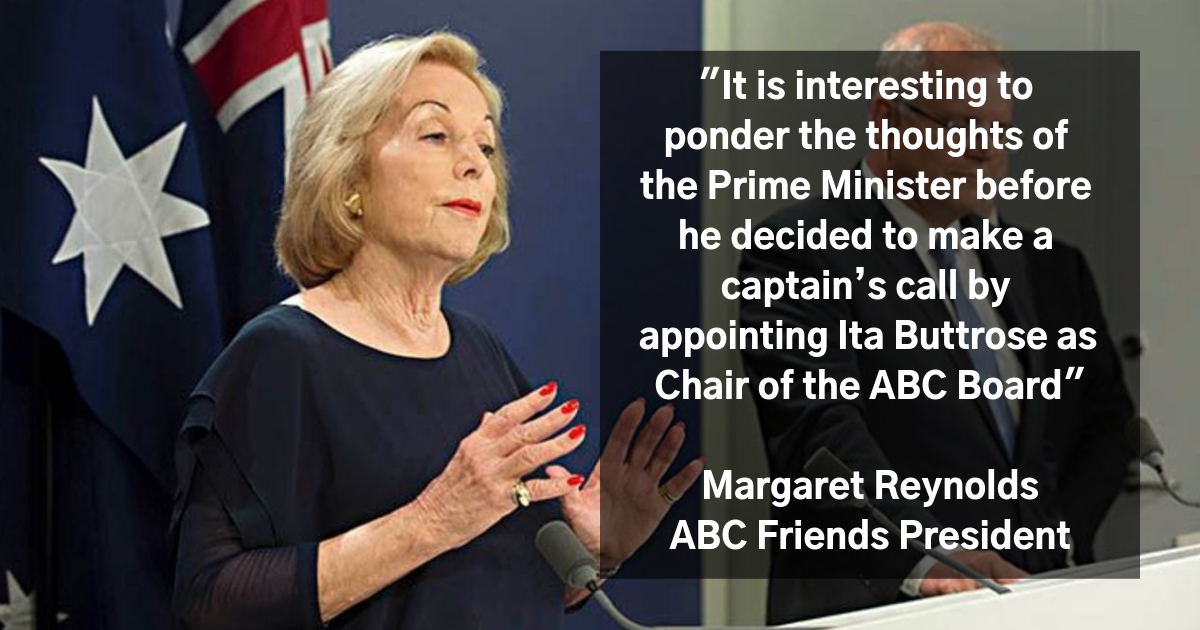 It is interesting to ponder the thoughts of the Prime Minister before he decided to make a captain’s call by appointing Ita Buttrose as Chair of the ABC Board. In doing so he has confounded critics and perhaps even signalled some remorse for the Federal Government’s continuous assault on Australian public broadcasting.

He has ignored the job search agency, which considered the aspirations of many male hopefuls, dismissed the recommendations of the Nominations Panel and instead installed a well-known Australian woman whose appointment has attracted few objections.

Ms Buttrose is a generally popular choice. Her six decade media career has attracted praise for the way she challenged the barriers of gender stereotyping to achieve prominence at a time when few women did. She certainly has an impressive background in journalism and a capacity to communicate with the Australian community.

In choosing such a familiar and respected individual to lead the ABC, Scott Morrison has considered several constituencies he needed to reassure before the Federal Election. He knows inner city Liberals are worried about the way he and two former recent leaders have overseen devastating government financial cutbacks and constant undermining of the national broadcaster.

He recognises his National Party colleagues want to protect regional services because their constituents depend on the ABC for information, entertainment and timely emergency warnings. And of course all Government members understand that the issue of privatisation promoted by the Institute of Public Affairs and accepted by the Liberal Party National Council has disturbed those Australians who may otherwise be regarded as conservative voters.

So can the Prime Minister retrieve the support of those Australians who rely on and trust the ABC?

Certainly the early comments from Ms Buttrose suggest that she may already understand she has a major task ahead to restore the ABC’s budget and capacity to fully meet its Charter obligations. She cannot achieve reform without strong support.

Ms Buttrose also will want to work with a government that values the ABC and is prepared to put time, energy and resources into visionary communications policy that will enrich the potential of the ABC, both for Australians and to communicate to our region. She can expect cooperation from government, but total independence in how the ABC reflects its priorities.

As shareholders of the ABC we also need a parliament that will monitor the actions of government to protect public broadcasting, which is so fundamental to effective democracy.

It is too early to predict how Ms Buttrose will assert her leadership role, but we do know that many Australians will want to see major reform in how it is treated by the next Federal Government

We will be watching for real policy commitments that will not be quickly forgotten by the incoming administration.

Margaret Reynolds is the National President of the ABC Friends National.