Posted in Latest news from ABC Friends on 18 February 2022

Posted in Latest news from ABC Friends on 18 February 2022

ABC Friends ignored the weather forecast and went ahead with its plan to hold a stall at the Lions Club of Northam’s Saturday morning market on 5th February.

A foolhardy band of volunteers drove or took the train to Northam on Friday afternoon; one of us brought his caravan. The weather was still hot in the evening, but we shared an enjoyable and convivial session of drinks and finger food in the inaptly-named Temperance Bar of the hotel where a few of us were staying, an hotel conveniently located opposite the market grounds, a community park beside the river. 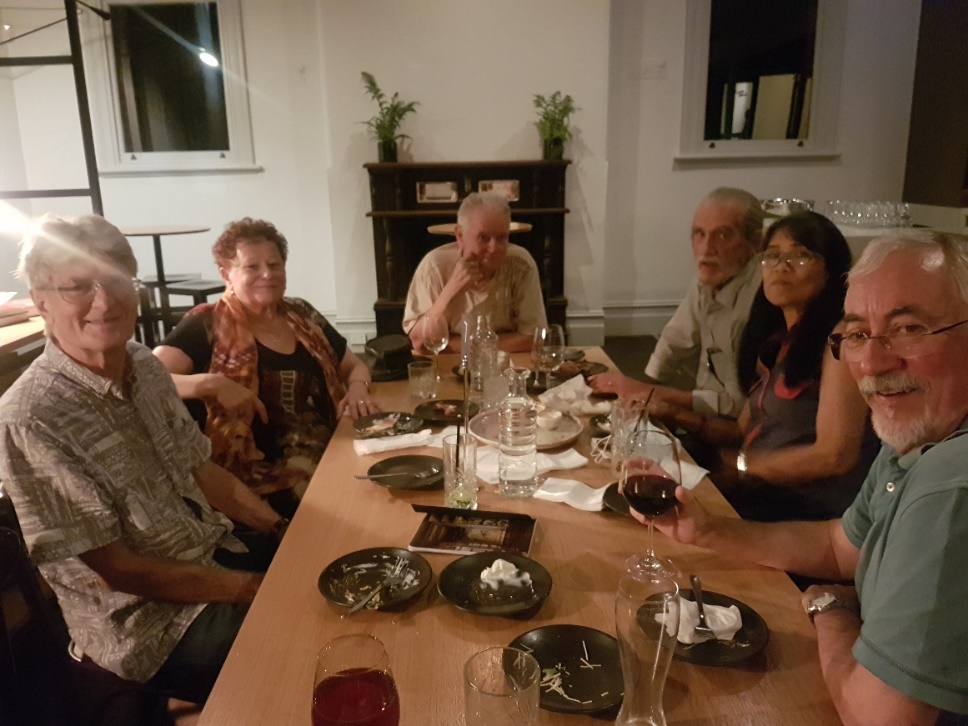 Northam is less than 2 hours’ drive from Perth in the WA region known as the Wheatbelt, and is part of the very large federal electorate of Durack. It quickly reveals itself as a country town with a different atmosphere and with other priorities to large urban centres, such as shops supplying the needs of farmers – as well as all the usual stuff found in high streets everywhere. Sadly, many of those shops were vacant.

We met up early on Saturday morning in the café attached to the hotel, and after we’d had what sustenance each of us could face on a very hot morning (in my case, coffee only), we unpacked the gear from two of our cars: the marquee and its bulky paraphernalia, trestle tables, chairs, two large and very full suitcases and the banner, all pulled or carried to the site of our stall. The market was not well attended, due to the weather of course, and we were told that there are usually many more stalls. Something to remember when planning stalls in the future.

We were joined by another volunteer, Rob, who drove up in the early morning. We erected the marquee and laid out t-shirts, tote bags and aprons on one table, and on the other, stickers, badges, bookmarks, copies of the national newsletter, information flyers with details about issues affecting the ABC such as funding, independence and freedom of the press in a democracy.

We had a special flyer for this market, asking locals to contact their federal member of parliament in Durack, Melissa Price, in support of the ABC. We gave away all of these flyers and then sourced more (which the hotel very kindly photocopied for us). 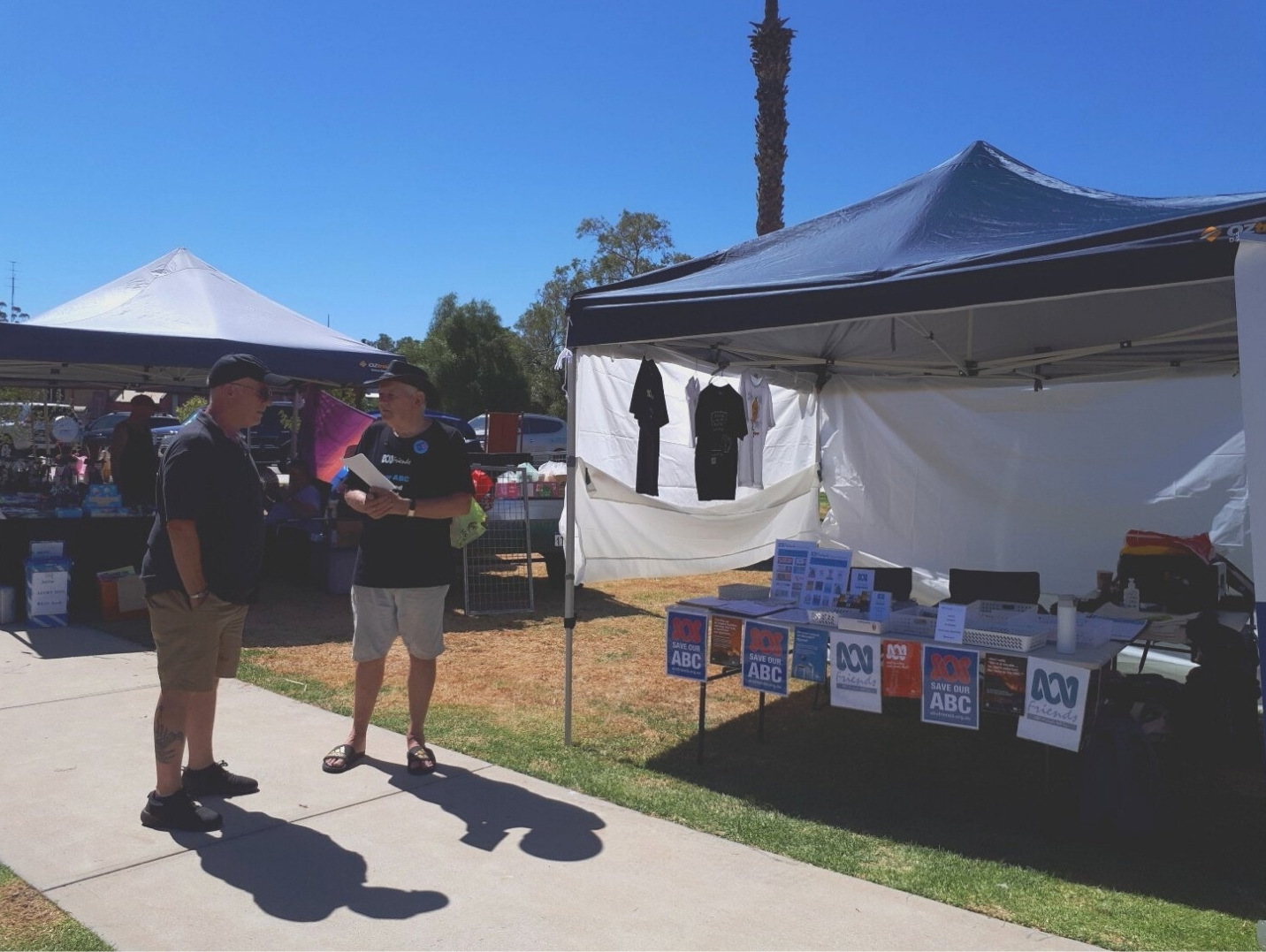 Eric (Right) talks with a local outside our stall.

We spent the next 3 hours having conversations with people; Henry, Eric and Rob stood up to the heat (it reached 41c!) and tirelessly talked to people, discussing our flyers. Quite a few people said they would follow up and contact the MP. Many conversations were held at the stall too, and one person joined up on the spot while several others took forms away with them. At 11am, we had all had enough; we packed up and either headed homewards or back to the hotel for refreshment, air-conditioning, and a debrief.

It takes some effort on the part of a team of people to organise and run such stalls. They are a very good way of interacting with the general public and getting a message across. ABC Friends around the country are making this effort, especially important at this time when the ABC is under so much pressure. I’d like to congratulate them all and thank them for their commitment.

PS: Before leaving Northam, I took a look at our billboard which has been up beside a main road since the middle of January. Here’s a pic: 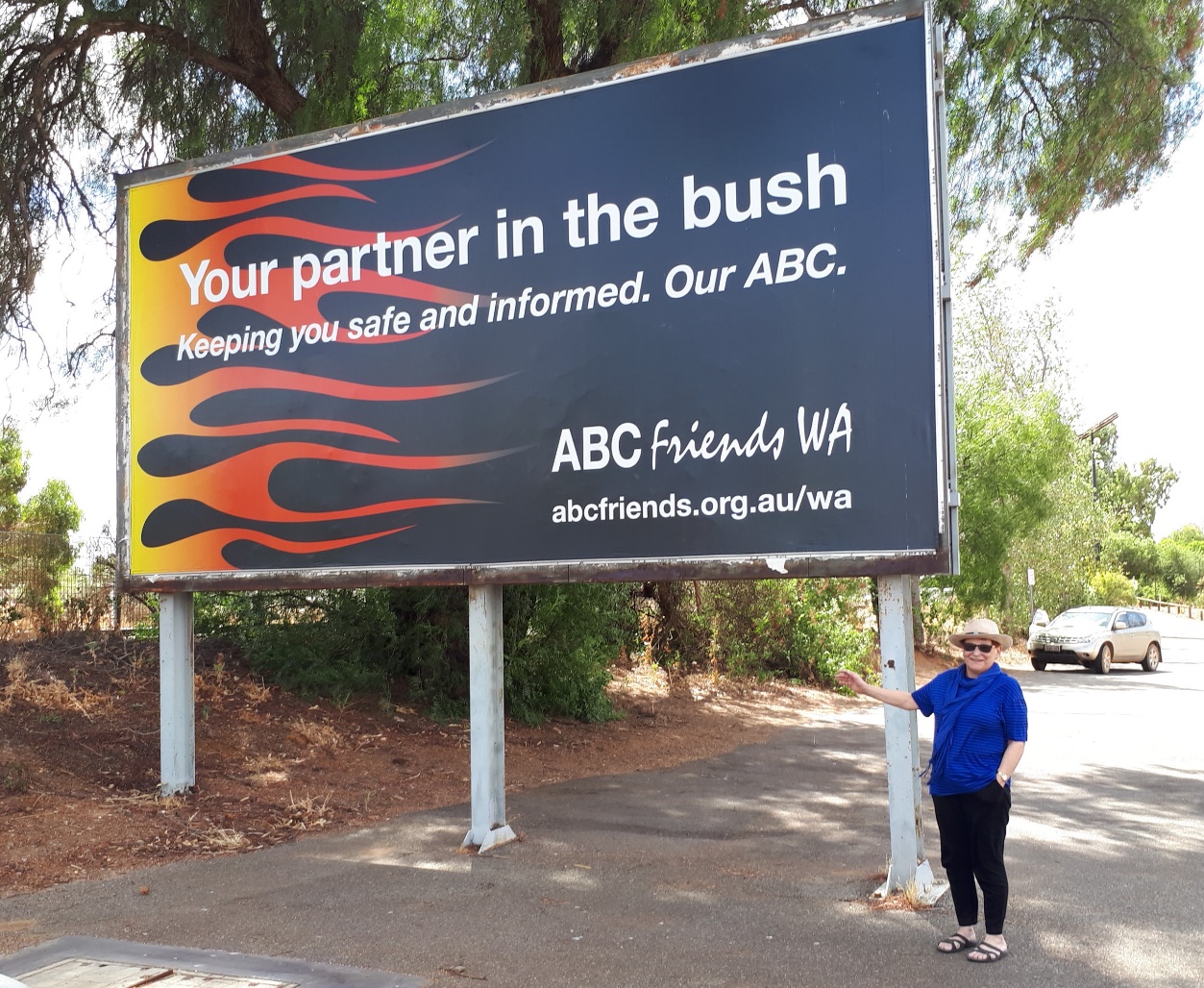