Peter George on why we must Defend Media Freedom

Posted in Latest news from ABC Friends on 13 December 2019

Peter George on why we must Defend Media Freedom

Posted in Latest news from ABC Friends on 13 December 2019

This is a speech given by Peter George at the 2019 Defend Media Freedom forum hosted by ABC Friends Tasmania. 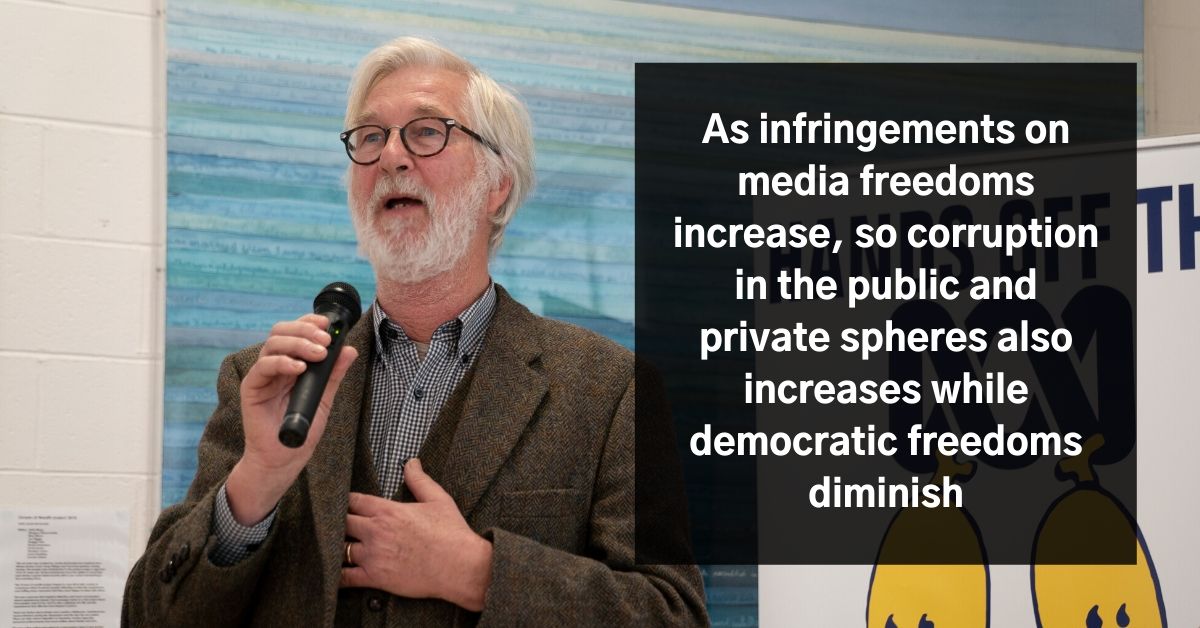 Peter George was the ABC’s first Middle East correspondent and an inaugural reporter on ABC TV’s Foreign Correspondent. During a career of four decades he reported from 6 continents covering conflicts, natural disasters, political events and social upheavals. Much of Peter’s reporting has been from countries in which freedom of the media does not exist or has been severely restricted but in which courageous individuals – often local reporters working under threat – have helped shine a light on events.

Congratulations to the committee for the timing of this forum – its subject could hardly be more topical in light of the unique collaboration between Australia’s newspapers all of whom redacted their front pages on the same day to protest legislative attacks on press freedoms.

It’s hard to imagine any other moment or topic that could unite Nine newspapers and the Murdoch Press … let alone the ABC.

I confess to being a poor substitute today for Peter Greste who spent 440 days in an Egyptian prison.  My record is one day in the Nuriootpa lock-up at 17 years old for vagrancy while searching for a job in the South Australian vineyards and, many years later as a correspondent, three days in a Syrian jail for attempted bribery.

I also cede the floor to Nick (McKim) and Andrew (Wilkie) when it comes to the domestic focus on legislative restrictions and political and commercial influences that affect the breadth, depth and impact on media freedoms.

My perspective is that of a reporter and, particularly, a foreign correspondent.

To me, the ideal reporter daily reports events as they unfold with as little cultural or political bias as they can muster.  With luck, all sides will accuse you of bias so that you can feel you’re well balanced: Gough Whitlam and Bob Hawke’s Labor administrations accused me of being a Liberal Party plant but as an ABC Four Corners reporter I was no doubt seen as a left-wing fellow traveller.

From day one as a reporter, I saw my calling as similar to that of a medieval town crier: All’s quiet, all is well; the King is Dead; the Vikings are coming; whatever news was important to the villager.  Report the facts as well as you can.

My experience overseas taught me nothing if not that the ability to report events faithfully to one’s own community lies at the heart of a political system that truly serves its people.

In many countries it’s a dangerous occupation: as of yesterday, 31 journalists, 6 citizen journalists and 2 media assistants have died this year pursuing the cause of a free-flow of information.  That’s 39 dead in 43 weeks. And lest we forget: Saudi journalist, Jamal Khashoggi, died just 12 months ago in Turkey at the hands of his own country’s assassins.

Moreover, there are at least 385 journalists in prison around the world … those that we know of.

This year’s Freedom House annual report is titled: Freedom and the media 2019: A downward spiral.

I don’t want to be alarmist because in Australia we do remain a strong, open, democratic society.

But we’re not immune from this worldwide trend.

And it comes at a time when Australians’ trust in the political and parliamentary process and in our politicians is slipping (with some notable exceptions).

On press freedom, Reporters Without Borders now ranks us 21st in the world – down two places in a year.  New Zealand thrashes us as 7th in the world.  We lag behind Surinam, Uruguay and Costa Rica – all in a region hardly known for its democratic values.

This ranking is particularly concerning when we learn we’re also slipping on the Global Corruption Index… back in 1995 we were 7th on the scale … our neighbours, the Kiwis, were at the top!  Today we’re 13th while the Kiwis have slipped a mere one place to second behind Denmark.

These two indices are interconnected.  As infringements on media freedoms increase, so corruption in the public and private spheres also increases while democratic freedoms diminish.

40% of the world’s populist leaders have been indicted on corruption charges while national corruption figures rise and media freedoms diminish.

More people trust TV and radio than newspapers.  In this at least, we’re a little ahead of the rest of the world.

Where does this lead us?

Well it means our strong suit is that most Australians trust us, the traditional news media.  But there’s no cause for complacency. The figures are declining. Nevertheless, it’s a reputation that needs to be protected and enhanced.

I believe we should be looking to Scandinavia for our lead.

Finland, Norway, Sweden and Denmark rank consistently as the least corrupt nations, the nations in which the media is most free and where trust in news outlets is highest.

For the most part Scandinavian nations have constitutional protections for freedom of speech and of the press.  Sweden’s laws led the way … they originated in 1776.

Furthermore, Scandinavians have human rights specifically protected in their laws and constitutions.  They have broad freedom-of-information laws in which the right to know often trumps the right to official secrecy.  In recent times, they have responded to economic threats to traditional media from the internet with anti-media-concentration laws.

Even Costa Rica, an exception in Central America, has a free press protected by Constitutional rights along with laws that preserve a citizen’s rights to demand the right of reply.

These nations would find it very hard to justify laws similar to those of Australia: Draconian penalties pursued against whistle-blowers; incredibly tough defamation laws; the impossibility to report freely on terrorism and national security; and news blackouts on events in Nauru and Manus island.

Media freedoms are under assault in Scandinavian countries as elsewhere and they require constant vigilance.  Laws intended to combat terrorism, hate speech or even fake news tend towards over-reach and may be self-serving to the political elite.  But we could do a lot worse than emulate the basic rights they have enshrined in their laws.

Let me leave one last thought behind.

In 40 years of reporting and having lived and worked in more than a hundred countries, I’m left with one clear conviction … a conviction that I suspect may not be controversial in this forum.

It’s that public broadcasting, independent of political interference, is a jewel in the crown of a democracy.

For all its flaws, its perceived biases, its often-narrow cultural focuses, institutions like the ABC are society’s lynchpins with imperatives that are not driven by commercial or political considerations.

These are shrinking but precious institutions under increasing attack globally and in increasingly in danger of disappearing.

Organisations like the ABC Friends play a truly important role not just in preserving public broadcasting in Australia but in conserving and increasing the public’s right to know.