Posted in Latest news from ABC Friends on 22 January 2020

Posted in Latest news from ABC Friends on 22 January 2020

ABC Friends would like to know about your experience of ABC Emergency Broadcasting during recent bush fires by answering the following short survey. 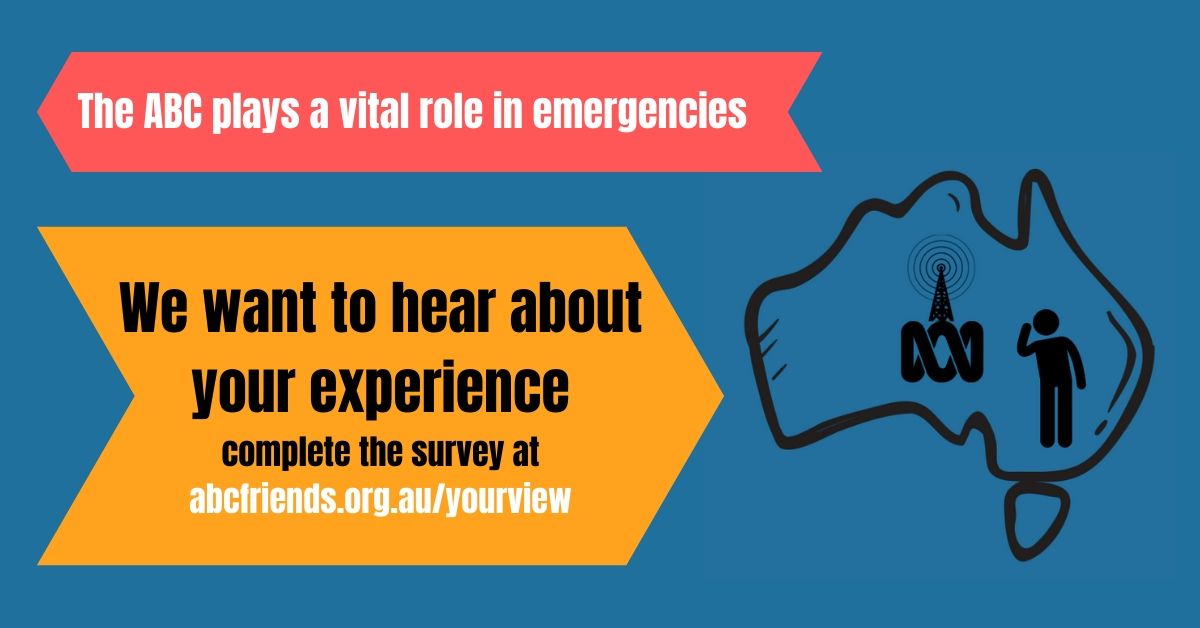 It has been a devastating introduction to 2020 to see so many Australians impacted by bush fires that have resulted in tragic loss of life and the disruption of so many communities where homes, businesses, and public infrastructure will need to be rebuilt.

Throughout this national disaster the ABC has maintained its emergency services broadcasts bringing vital information and advice to thousands of people who rely on these services, often when no other is available. The Federal Communications Minister Paul Fletcher has praised ABC staff for their considerable contribution to keeping Australians safe.

ABC Friends also applaud the role of the ABC and want to ensure the Federal Government fully recognises its essential role in maintaining communications during this crisis.

We want to collect information about the experience of communities directly affected and so we would appreciate your response to a survey we have launched to help us prepare a submission to the Federal Government and the Parliament in February.

In addition, we welcome comment from people around the country who recognise that preparing for future bush fires is important as communities assess the current extensive damage. We need to know our government invests in public infrastructure and policy that contains the consequences of such disasters.

As we know the ABC is our vital communications link in keeping Australians informed of risk and providing advice about their safety. In 2020 ABC Friends will be campaigning to restore ABC funding so reduced in recent years.

We greatly appreciate your advice and support. Please complete the survey here.