Time for 'starved' ABC's funding to be restored

Posted in Latest news from ABC Friends on 20 April 2020

Time for 'starved' ABC's funding to be restored

Posted in Latest news from ABC Friends on 20 April 2020

Former CEO and editor in chief of The Age, and ABC Friend Media Advisor, Ranald Macdonald writes that, "It is very much the time for the ABC to be recognised for what it offers daily for all Australians." 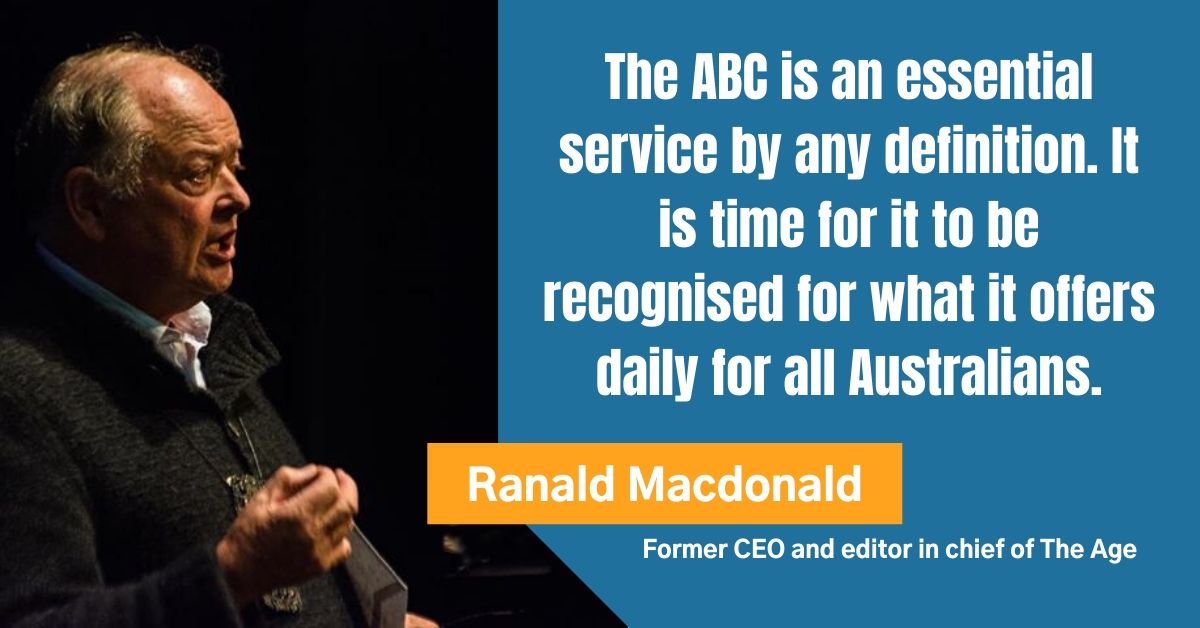 Yet the Government, and other self-interested or ideological opponents of our National Broadcaster, continues to undermine the ABC and fails to recognise what it does for Australia.

Funding cuts and staff losses (1,000 already under this government, with 200 more set to follow with the Govt $84 million further reduction in funding) continue despite its stellar performance in regional Australia on radio and television, in education, children's programs, emergency services and balanced reporting of COVID 19 and its consequences, entertainment and giving Australians a voice. 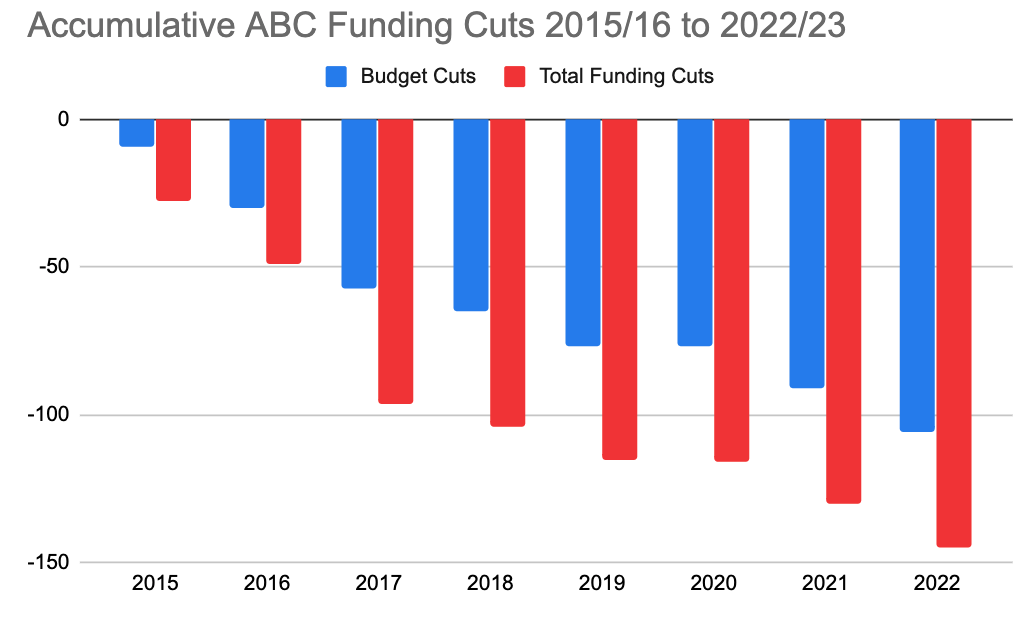 “It has more certainty of funding than any media organisation”: The PM and his ministers keep saying – yet that is such a meaningless statement.

Our National Broadcaster through its 48 stations, four television channels, iview, News 24 does cost over a billion dollars a year, with 180 million of that being spent on transmission.

It services the whole of this vast country.

It is independent by statute under the ABC Act, yet the ‘commercials’ are what they are – media organisations seeking to make profits through advertising or other charges.

Minister after Minister says the ABC gets more money each year. 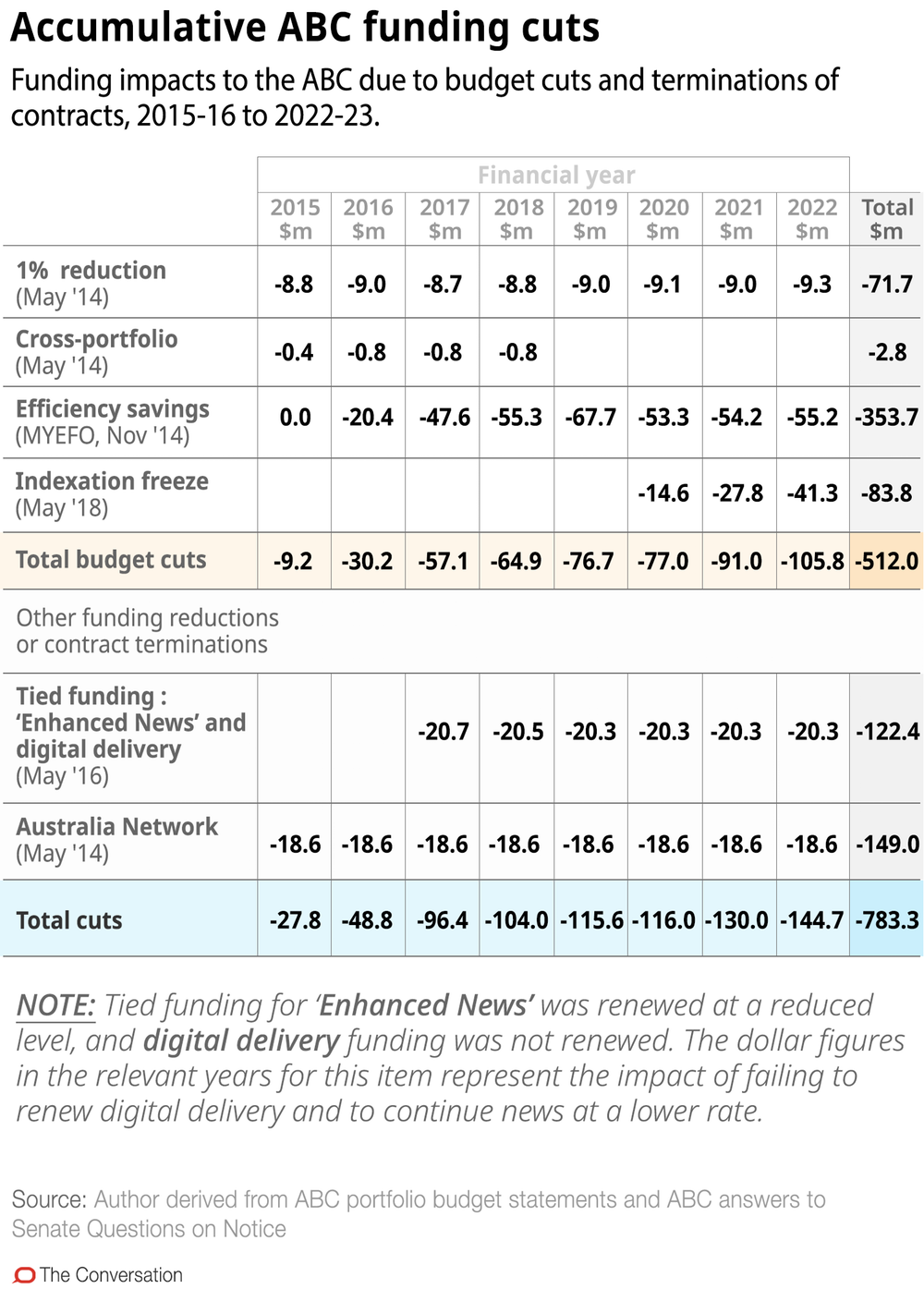 Without boring you with the details – it does not. It is a misrepresentation – in real terms nearly 30 percent reduction over the last 28 years with more scheduled to follow.

The accounts are presented with glorious naivety after pretending that special funding for digital and regional and other necessary costing did not exist – those cuts are just excised. And further the only one covered by inflation rises (being transmission) is brought into the general figure.

So, the money available for providing programs and services for all Australians – as the commercials drop out of regional coverage, are given a holiday on Australian produced programs and are not required to provide children's programs – is less every year with costs inevitably going up.

Why else the staff cuts, the necessity for joint productions with commercial outlets for the best of entertainment, and the endless BBC repeats?

Because the ABC is starved of funding.

You don’t dispense with 1200 staff for fun, you don’t stop making original and successful Australian series on a whim or ask over-worked staff to do multiple tasking which impact on what is put to air for NO reason.

Three figures which might give an inkling into the priorities of this Govt.

The PM goes overseas after Australia Network was de-funded through the $254 million Tony Abbott ABC cuts and promises $17 million in overseas programming to our Pacific neighbours from Commercial Television outlets – without them asking for it - despite DFAT recommending the ABC provided the material, $30 million is given to Rupert Murdoch’s pay channel Foxtel for “women’s sport” coverage without them asking, $90 million following a smaller grant has just being given for regional newspapers and regional television.

None yet for the ABC, which has to accommodate the budget $84 million cut.

Has the ABC and SBS not shown that they are providers of public interest journalism, education, quality programing and entertainment all round Australia? The latest figures show a 53% increase in community use of the ABC for information during COVID19 which surely indicates that the ABC has community trust?

Why not reciprocal support and a demonstration of ‘trust’ from the Morrison Government? It is an essential service by any definition.

ABC Friends have launched a pledge to value our ABC - you can find it here.