Three times a year this three-person team sources and reads every word that finally ends up in our ABC Friends Update publication. A stimulating satisfying task, where items from all over Australia are derived. Deadlines still matter; dollars drive what is on the cutting-room floor. Meet the team, Mal Hewitt, OAM, Dr Diana Wyndham, and Angela Williamson. 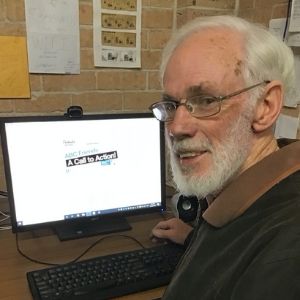 Update Editor, Mal Hewitt, getting near the pointy end of the June 2020 edition.

Mal Hewitt, OAM, a Music teacher in the public sector, he still conducts orchestras, including for each of twenty years organising and conducting a choir and orchestra at a major fund-raiser for Westmead Hospital in the Sydney Town Hall, raising $tens of thousands each performance. 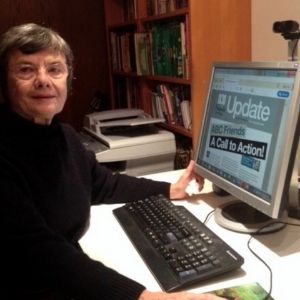 Our Update Assistant Editor is Dr Diana Wyndham, a dogged pursuer of detail and approval to re-publish from other sources. The qualities of Diana’s pedantry and attention to detail are evident in the outcome of our periodical publication.

Diana is an historian and author, including being co-author of ‘Populate and Perish’, on Australian women’s fight for birth control.

Diana at her Update Assistant Editor desk. The photos she finds, the attention to filing, what must go in, what might have to be dropped, the careful verifying of right to re-publish. We are in safe hands with Diana. 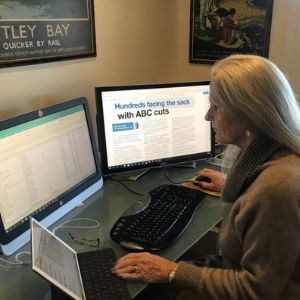 Update Production Manager, Angela Williamson contends with the microscopic detail of who receives the hard-copies of Update, and edits excel-spreadsheets. Writes the odd human-interest story of one of our amazing members, or a former employee at the ABC – June 20 issue, for example, does both: member Dawn has written a book about her Dad who was for ~40 years an ABC Radio Technician, meeting many 20th Century ‘A-listers’ and spies(!) and took in his clever stride solving problems for NASA and the Sydney Opera House Concert Hall.

Angela was an Analyst-programmer, a former National Trust Councillor, a Founding Board Member and hands-on fundraiser of the Australian International School in Jakarta, one of the organisers of the Century-on 36 Day Re-enactment of the WW1 Kangaroo Recruitment March, a keen Zontian of over 30 years, and, the special passion in her life, a singer in the soprano register.  Enjoys singing the ABC Song:  Where would we be without our ABC?