Posted in Latest news from ABC Friends on 16 January 2023

Posted in Latest news from ABC Friends on 16 January 2023

Vikki Uhlmann resigned as President of ABC Friends Qld and set off in her van, with her dog Rusty, to talk to ABC staffers in offices across western Queensland, the Northern Territory and WA. She wrote these pieces after interviews in Karratha, Geraldton and Perth. 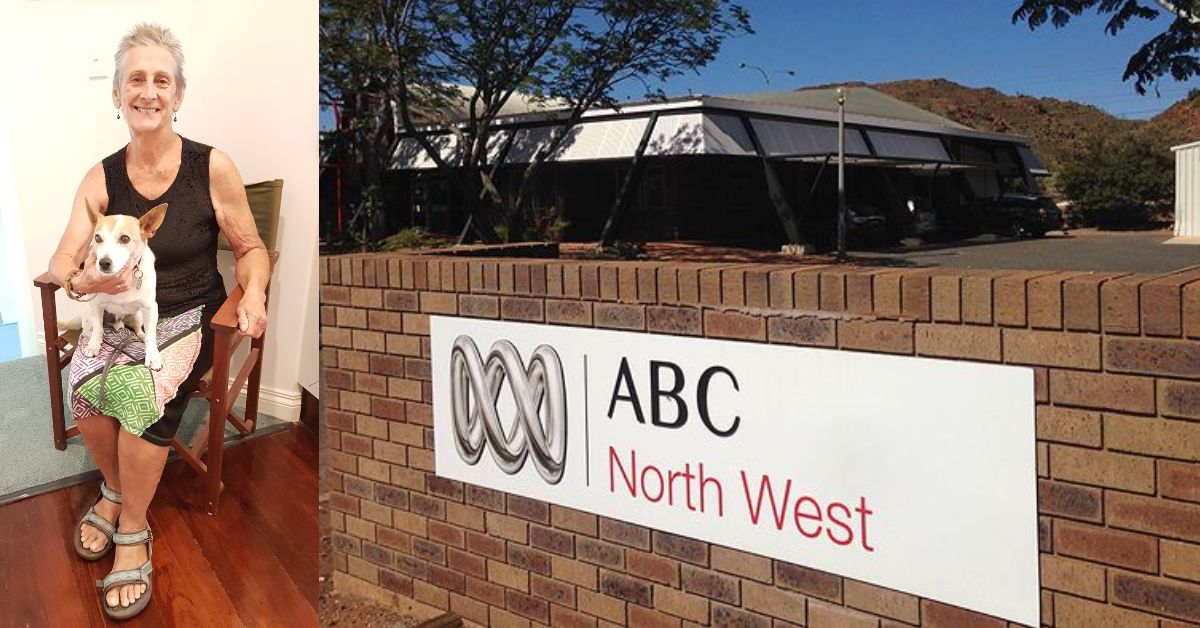 ‘I spoke to Andy by phone from Settlers Beach near the little WA town of Cossack.

When Andy started as Chief of Staff in the Pilbara over two years ago, there were six staff. But after the social media deal with Google and Facebook was brokered by the ABC, things improved. He was able to contract three extra staff, one in Port Hedland and two in a new Carnarvon Bureau.

This is a similar story to that of our Longreach Bureau in Qld, but cyclones add a further twist. The west coast of WA can cop some pretty bad weather and their building which had been established in the 1980s was not cyclone rated. So they have just moved into their new premises at 184/26 Sharp Avenue in Karratha. Now they can provide emergency broadcasting from the new premises, instead of having to route it through other stations.

Check the map, ABC Pilbara broadcasts to an area covering from the Overlander Roadhouse near Shark Bay up to Sandfire Roadhouse on the Great Northern Highway, and just as wide.

Remember Wittenoom and blue asbestos? To mark the recent occasion when the nearby town was finally closed down, ABC Pilbara ran interviews with locals gathering their memories of living and working in the town. You can find them in the Look Back section of the ABC website.

And finally, like other ABC bureaus, when they upgrade their equipment ABC Pilbara gift their old technology to the local Aboriginal radio station, in this case, Ngaarda Media at nearby Roebourne.’

‘Sam started in Karratha as a reporter a year ago. Unlike the new staff hired around Australia following the social media contract with Facebook and Google, she has a permanent position.

Sam had grown up with the ABC in her household in Bunbury, WA. Without realising it she had formed the view that it is a trusted and respected institution. After finishing her journalism studies at Edith Cowan University, she went to work in financial journalism, but did her traineeship in community radio and realised her heart was in community news.

The ABC was the obvious choice for employment, as it’s based in more communities across Australia than are the commercial stations. Sam’s now doing a two-month stint to hold the fort at the new office at Carnarvon, at the southern end of the ABC Pilbara broadcast area. She’s filing daily news and feature stories. Writing positive community stories is important to Sam. She said it would be too easy to focus on the high crime rate in some towns across the North of WA. While acknowledging that is important, dramatising such stories does not reflect the real nature of the towns and damages the image that visitors receive.’

A tour of ABC Midwest and Wheatbelt, Geraldton, 15 November 2022

I had had trouble contacting the ABC in Geraldton. I resorted to simply knocking on the front door, and a young staffer named Jeremy Jones let me in and gave me a quick tour. He does the Breakfast show from 6:30 to 8 a.m. which means he gets up at 4:30 am every morning. And he loves it. Like other young ABC reporters I’ve met, he grew up with the ABC.

The brightly coloured Geraldton studio is just a stone’s throw from the beautiful main beach. Geraldton broadcasts to a huge area from the Overlander Roadhouse on the North-West Highway to Meekatharra in the east, and down to the Great Eastern Highway. ABC Midwest and Wheatbelt have just grown from eight to eleven permanent staff.

I met Chris Lewis in their studio; he is the Mid West WA ABC Open producer. He produced the story on musket balls possibly from the Gilt Dragon, a Dutch ship wrecked off the coast of WA in 1656. Survivors of the wreck who made it to shore had disappeared when rescuers arrived. See https://www.abc.net.au/news/2022-11-15/gilt-dragon-shipwreck-mystery-develops-with-bolo-balls-found/101598608.’

‘Did you know that ABC Radio Perth was one of the forerunners of the ABC in Australia?

It’s true.  In 1924, the station that is now ABC Radio Perth was set up by Wesfarmers, which is why its callsign for many years was 6WF. In 1932 the station became part of the newly formed Australian Broadcasting Commission and this year the ABC, now a corporation, celebrated its 90th year across Australia.

ABC Perth moved to its East Perth location in 2005. There was a goal of bringing the three big divisions of the ABC, Radio, News and Television, closer together in a purpose-built facility to enable greater collaboration. However, over the years the ABC across Australia has lost a great deal of funding and consequently Radio National’s staff numbers have dwindled and television production has become concentrated in the east.

In what might be seen as a silver lining to the recent Covid pandemic, some staff from double J, triple J and Rage came back to Perth to be near family, a trend the ABC in Perth would like to see continue!

Danielle has held her position, roughly equivalent to a Chief of Staff, since 2017. For Danielle, ABC Radio is “the heart of the community”, and enjoys a high level of trust. In the current fractured media environment she says it is important to create content for Australians where they are consuming media which is why ABC Radio Perth has increased their focus on digital and social media. The key driver for using a wider range of communication formats is the desire to maintain the ABC’s relevance for everyone.

With a focus on big community initiatives these days, Perth’s ABC Gives project has raised an amazing $427,000 for Foodbank WA, and it hasn’t finished yet, the donation portal will be open until New Years Eve.

With funding from the social media deal with Facebook and Google, the ABC is again growing its presence in regional WA at a time when commercial stations are reducing theirs. Danielle’s advice for aspiring journalists wanting to join the ABC is to get your experience in the regions first before applying to Perth.’