Posted in Latest news from ABC Friends on 01 September 2020

Posted in Latest news from ABC Friends on 01 September 2020

ABC Friends' media advisor, Ranald Macdonald, has published his take on the letter of response that many Friends would have received recently after writing to the government about ABC funding. 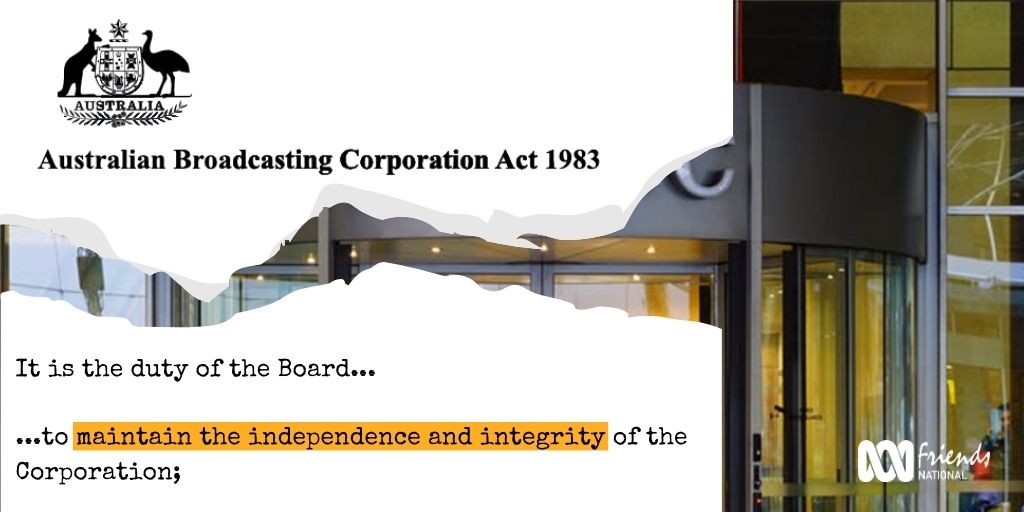 Many ABC Friends have been writing to the Members and Senators to express outrage about the ongoing government funding cuts to the national broadcaster and the undermining of its independence.

They have received the official government response which has emanated from the Minister for Communications office.

They are wrong and so appallingly misrepresent and/or misunderstand the role and importance of the ABC.

Here is my suggested answer to this particular brand of government spin...

It is important to recognise that the ABC is NOT a Government instrument, department, public sector agency or entity.

Under the 1983 ABC Act, the Australian Broadcasting Corporation is a statutorily independent body, independent of Government.

Further, that the Minister can raise concerns with the Board, but its only requirement is that it ''gives consideration" to the Minister’s concerns - not that it has to follow them.Government reductions in the budget on the basis that all Government entities need to take cuts or take "efficiency dividends" are just a smokescreen for its agenda to reduce the effectiveness of the ABC.

The ABC is an essential service for all Australians.

It is totally irrelevant for the Prime Minister and others in the Government to repeat the mantra that the ABC has funding 'certainty' that the commercial operators don’t have.

The IPA influence on the Coalition rears its ugly head!

So, in responding to the these government letters let us all be clear.

The ABC has had a substantial cut in funding which carries through over the next two years.

That is why the Management and Chairman have confirmed that the ABC is forced to reduce further by up to 250 staff on top of over the 1000  already retrenched following the Abbott $254 million cuts in 2014.

Ask yourself why the leadership is getting rid of so many talented people?

Answer. Because the money is not there to pay for them.

Then, and most important, your response to the Coalition ‘deniers' is, that the ABC is providing or attempting to provide more with less.

Look at the emergency services responses, the increased coverage of rural and regional news and information which the commercial operators have pulled out of, educational and children's programs, the news and current affairs coverage on both radio and television during these COVID-19 times, international reporting, the arts and entertainment etc.

The conclusion to the Government’s ever repeating mantra that the ABC is adequately funded is that it is a lie - and that it is providing an essential service for all Australians.

And should be praised rather than targeted.