Research shows Australians turn to the ABC during crisis

Posted in Latest news from ABC Friends on 03 June 2020

Research shows Australians turn to the ABC during crisis

Posted in Latest news from ABC Friends on 03 June 2020

Independent research has reinforced ABC Friends' survey from earlier this year: Australians turn to the ABC during a crisis. 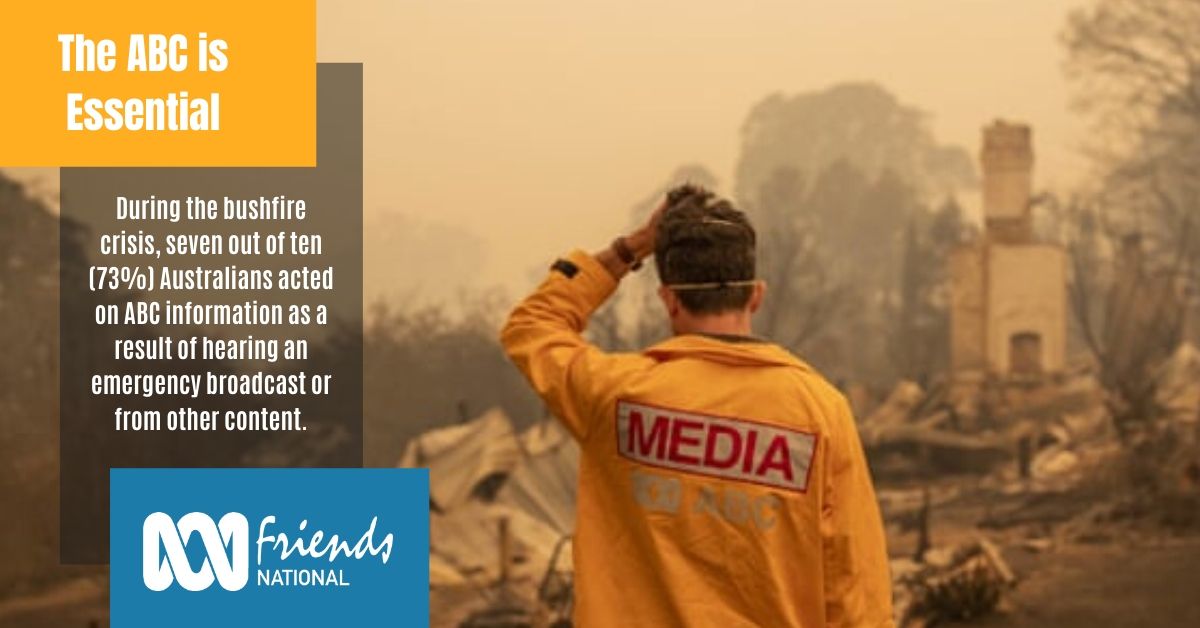 The ABC commissioned the research - conducted from March 17-27th, 2020 - from Ruby Cha Cha and was submitted to the Royal Commission into the National Natural Disaster Arrangements established in response to the bushfire season of 2019-20.

ABC Friends believe that the ABC is an essential service, and been running a campaign for restoration of funding. You can join that campaign here.

Please see below for the full media release by the ABC:

Australians turned to the ABC in record numbers during Australia’s bushfire crisis.

Independent research* commissioned by the ABC showed that not only was the national broadcaster the most trusted information source but lives were saved as a result of people acting on information the ABC provided.

The ABC’s research was submitted to the Royal Commission into National Natural Disaster Arrangements which was established in response to the extreme bushfire season of 2019-20.

The ABC’s role in providing a rolling source of information was crucial in allowing people to be informed and aware of danger, to make plans, and in evacuating.

At the height of the bushfire crisis (31 December-14 January) ABC Sydney and ABC NSW local radio produced 296 hours of rolling/continuous fire coverage, ABC Gippsland 134 hours, and ABC Melbourne 83 hours.  Over that same period, the ABC undertook emergency broadcasting for over 200 emergency events across the country.

For many people, when digital and telecommunications failed in bushfire impacted areas, ABC Local Radio was the only way to access timely information and helped people survive.

Importantly, it was also found that the ABC is pivotal in supporting bushfire recovery at all levels of the Australian community.

ABC Managing Director David Anderson said: “Australians turn to the ABC at times of crisis and on some occasions during last summer’s bushfires the ABC was a central source for life-saving information.

“This research confirms the ABC’s fundamentally important role in delivering those critical services to the Australian public.  We are fully committed to protecting and investing in our emergency broadcasting to ensure we continue to deliver a service of the highest quality and accessible to everyone.”

The research was commissioned to ascertain the extent to which the ABC delivered on its aims to help Australians understand the scale, root causes, and aftermath of the bushfires, help those impacted by providing emergency announcements to communities directly impacted, drive community-led support through the use of ABC radio, and ensure a safety-first approach to avoid injury and save lives.

The research highlighted the importance of raising awareness of the ABC’s emergency broadcast channels and digital services and the need for improved information on radio frequencies to enable people to source ABC Local Radio as it provides the most up to date and reliable information.

The ABC will work with all levels of government and the emergency services to inform the community about these services.

ABC Radio’s reliance on signal and transmission towers also means it is critical that this infrastructure is funded, maintained and operational during a bushfire crisis.

The ABC in partnership with the Red Cross raised $13 million to assist people impacted by the bushfires and is continuing to provide essential information on recovery efforts as well as ongoing editorial coverage of affected communities.

This has included a week-long series of live broadcasts from East Gippsland and extensive coverage of recovery efforts on the NSW south coast as well as outside broadcasts from Kangaroo Island and other affected towns in South Australia, Victoria and NSW.

An additional quantitative survey involving 373 respondents was conducted in parallel among Australians living in postcodes affected by the bushfires during December 2019/January 2020 with a small qualitative sample of 16 bushfire affected residents interviewed in a mix of face-to-face and zoom technology formats.