The recently formed ABC Friends Southern Highlands Branch held its first public event on Saturday 5 December. We set up a table in the Springetts Arcade in Bowral where we displayed items for sale as well as having information available for passers-by about ABC Friends and how it speaks up for the ABC on behalf of the vast majority of Australians who are ABC supporters. 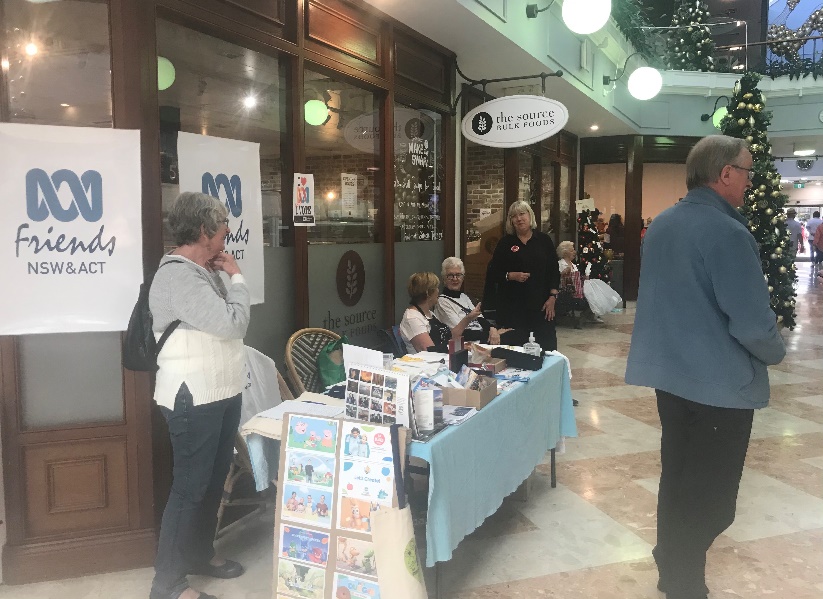 Belinda, Kerrie, Gill, Deb & Trevor speaking with an ABC supporter out of shot

There were plenty of people walking through the arcade to whom we were able to hand postcards and flyers, particularly the one produced by ABC Friends National entitled ‘No cuts to the ABC? – Check out the Facts’.

Our members managing the table enjoyed talking with the many people who said: ‘all we watch and listen to is ABC and SBS’. Quite a number expressed pleasure when they learned that we now have a local Branch in the Southern Highlands that they can join and support in speaking up for OUR ABC. Several 2021 calendars and aprons and T-shirts sold, helping the coffers. ‘Bananas without pyjamas’ always a popular T-shirt.

A lady from a farm south of Gunnedah spoke emphatically about the rural need for the ABC: Landline, news generally and, of course, emergency broadcasts that the ABC does so well and thoroughly.
Trevor approached a gentleman who was carrying a stick with a real parrot on it (as you do...). Trevor asked for the parrot’s name (Dolly) and when Trevor gave the man some information and a Christmas card, Dolly said ‘Thank you very much’!