Posted in Latest news from ABC Friends on 28 June 2020

Posted in Latest news from ABC Friends on 28 June 2020

ABC Friends have written an open letter to the Prime Minister in the wake of the recent staff and funding cuts. 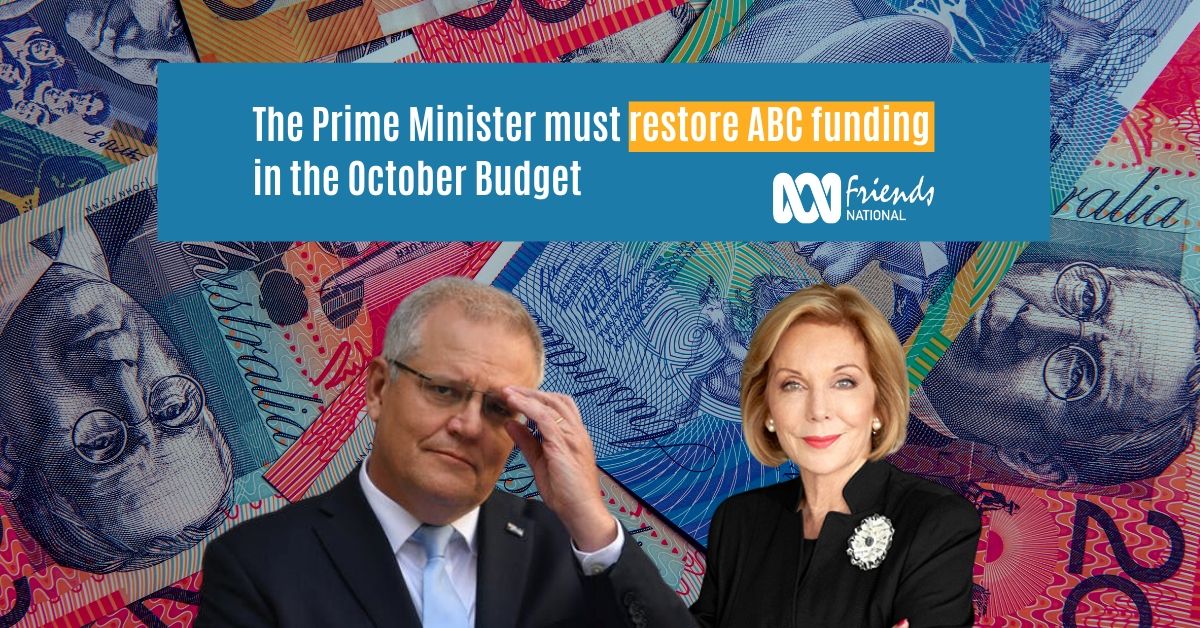 I write on behalf of many angry Australians who want to know why your government continues to undermine Australian public broadcasting with ongoing funding cutbacks at the same time as the commercial media sector is favoured.

Your recent statement that "there have been no cuts to the ABC" sadly reminds us of Tony Abbott’s similar bold election promise in 2013. Yet this was followed by major cutbacks in his first Budget as Prime Minister. Clearly in our current media environment there are facts and 'alternative' facts, it all depends on the presenter and the audience.

Many of us are more inclined to rely on information from your ABC Board Chair, Ita Buttrose, who said in her 2019 Foreword to the Annual Report – "our task has been made harder by the imposition of the three year indexation freeze which comes on top of a $50 million a year cut now embedded in our base."

We see the recently announced Five Year Plan as a brave attempt by the Managing Director, David Anderson, to live within your government's funding allocation, but obviously further staff cuts and downgrading of ABC services and programs is an inevitable outcome of reduced funding.

We all appreciate that governments rely on a degree of political spin to make their decisions seem more palatable, but do you seriously expect the community to believe that an ABC Managing Director would deliberately retrench so many staff and downgrade services and programmes if the ABC Budget was adequate?

We expected more of your leadership because you have a responsibility to act on our behalf, as ABC shareholders to enable the ABC to fulfil parliamentary approved obligations under its Charter. The Federal Government acts as caretaker of all our national institutions and in this regard the ABC ranks highly with the Parliament and the High Court in protecting the interests of all Australians.

Chair of the ABC Board, Ita Buttrose has consistently tried to work with you and your Communications Minister, Paul Fletcher, to get a realistic re-assessment of the ABC Budget to meet the demands of a changing media environment and national emergencies. Yet these genuine efforts by both Board and Management have been repeatedly ignored. Furthermore, there has been a quite calculated misrepresentation of budgetary analysis since 2014 assuming that official promotion of fake news will provide an effective distraction from the reality of past and current government decision making, which has resulted in an ongoing 10% budget reduction.

Over the past six years the ABC has been the target of funding cuts, various enquiries, political attack and even a police raid. You can not be surprised that Australians are outraged about the latest announcement this week which will culminate in further job losses, valued services and Australian content. You regularly advocate protection of jobs and your COVID-19 employment protection initiatives are admirable. Yet successive Coalition administrations have caused the loss of 1250 ABC professional staff.

Can you explain to us why you are so determined to downgrade the ABC, which is a valued national treasure supported by over 80% of Australians? We understand that you are regularly lobbied by the Murdoch American News Empire and other commercial media interests, which are ideologically opposed to public broadcasting. Furthermore, we know that some members of your cabinet are members of the Institute of Public Affairs, which advocates privatisation of the ABC. However, ABC Friends would respectfully remind you that, as Prime Minister, your first loyalty is to the Australian people and our public institutions.

As a national organisation we have been overwhelmed by expressions of public concern about the way the ABC is being treated. So many comments express ongoing frustration that many of our elected representatives seem incapable of recognising the ABC as an essential public service on which Australians depend. We have received hundreds of letters and comments which we will be collating for public release, but here is just one example to offer you some insight into how Australians feel about the continued assault on the ABC.

"I am shocked, then saddened, then disgusted, then outraged by the government's attack on the ABC. The Federal Government should be creating jobs instead of destroying high quality 'clever country' jobs. Prime Minister Morrison led a government that was unique in bringing together differing interests across Australia to benefit the nation and lead us out of disaster. But now? The attack on the ABC is a fundamental attack by the Morrison Government on its claim to govern in the national interest."

We urge you to reconsider your government’s responsibilities to the ABC by conducting immediate meaningful negotiations with the Ms Buttrose and Mr Anderson to plan a way forward to restore ABC funding. This discussion should include a commitment in the October Budget to recognise ABC staff and services as essential in post COVID-19 planning .

We look forward to a fresh approach to public broadcasting policy and can assure you such commitment will be very much welcomed by the Australian public.