How to critique your public broadcaster

Posted in Latest news from ABC Friends on 28 January 2021

How to critique your public broadcaster

Posted in Latest news from ABC Friends on 28 January 2021

Seen a program or a story you don’t like on the ABC?

In my experience your complaint will most likely fall into one of three broad categories:

If your complaint fits into category 1, my only advice to you is ‘go for it’.

Generally, any reputable public broadcaster will have:

You can find the ABC’s here, here and here.

If your complaint fits into category 3, my advice to you is ‘don’t expect to be taken seriously’. A little intellectual honesty goes a long way, and you’re not fooling anyone if you try to argue that, for example, your real complaint is that the steak you have been served is too overcooked or too rare, when everyone knows you’re a vegetarian.

My focus today is if your complaint fits into category 2.

If this is you, then you are likely to need some honest advice because you will often find your complaint is ignored or given short-shrift.

There are good reasons for this, and it is within your power to fix it.

Why do these complaints fail (or get ignored) so often?

It boils down to either a lack of evidence, or the wrong kind of evidence.

To explain this, let me give you a simple imaginary example, and then a real life example.

If you tell me that a coin is biased towards ‘heads’ over ‘tails’, I will want to see evidence.

If you flip it in front of me and it lands on ‘heads’, that’s not proof of bias.

If you then tell me it has landed on heads 50 times in the last 24 hours and list all of those occasions, I will naturally want to know how many times you tossed the coin in total during those 24 hours.

In other words, pointing to one, two or ten different stories by a public broadcaster as proof of bias is pointless.

After all, we’ve all heard of confirmation bias.

A few weeks ago, I encountered a typical assertion of the ABC’s systemic failure to do its job as public broadcaster. It read as follows:

“Pretty hard to deny that normal editorial processes are (not) working at ABC News - the entire organisation has been compromised by a senior management who has prostituted journalistic integrity to appease the fascists bleeding them to death.”

The prompt for this, as far as I could tell, was recent suggestions that the ABC was downplaying the nature of the riots at the US Capitol by holding off on declaring them to be an “insurrection”, as well as soft-pedalling its criticism of some fairly outrageous and anti-science remarks about coronavirus from a member of Government.

Both of those specific examples were interesting and worthy of comment (for the record I thought the first was reasonable in the circumstances if a little editorially cautious, while the latter struck me as an error the organisation itself quickly fixed).

But to turn them into proof of the collapse of normal editorial processes at the public broadcaster struck me as typical over-reach. So I responded by defending the ABC, and making the same point as I make in this article, that systemic criticisms require systemic examples and not just the occasional anecdote chosen because it fits the argument.

In response, a few specifics then started to emerge, many of which were hard to assess and lacking in specifics (e.g. a big story was “quickly dismissed’ or ‘hardly mentioned’), but some of which struck me as tantalisingly easy to follow up.

“In 7 years of Coalition Gov't, with so many scandals, Four Corners, a wonderful program, has barely done 2 stories on Coalition scandals. Cowed by the expected reaction.”

Now if I had the time and energy, I (and so could you, for that matter) could go back over the last seven years of the program’s output and compare it with seven years of the program when Labor Governments were in power and do a full comparative analysis. Of course, that would involve not only comparing the program’s output during those years but also attempting to form a view on how many ‘scandals’ each of those administrations had been involved in and how well they had been covered.

Maybe I will do that one day, but for now I decided to look for a slightly quicker and simpler comparison that was both easy and helpful to put some flesh on the bones.

The important thing to say about this choice of years is that it was not chosen to try and ‘cherry-pick’ data that either supported or undermined the complaint. It was done as a good faith attempt to find a sensible and relatively quick way to test the evidence.

This is what I found: 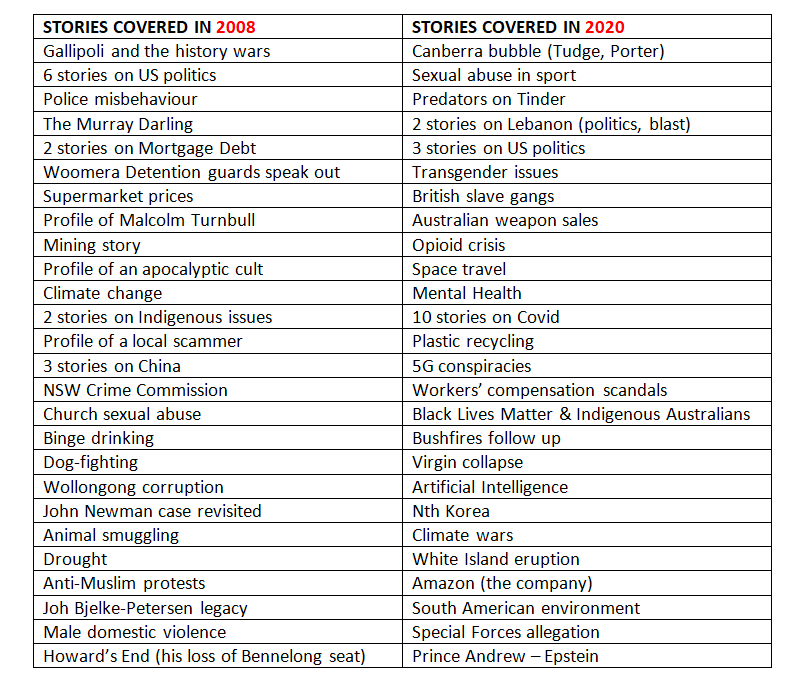 A couple of initial observations:

Looking beyond these initial impressions, it is clear that a consistent and defining characteristic of the program in both years is a commitment to covering real social issues that affect Australians – climate change, bushfires, drought, house prices, health, agriculture, crime, sexual abuse, domestic violence, race relations, the economy, business and the workplace.

Combined with international buy-ins, this makes up the bulk of content in both years.

But what of the complaint? Does a closer, fact-based analysis of these two years in the program’s history –one under Labor and one under the Coalition – show that the ABC is failing to cover political scandals because it is afraid of the Government’s reaction?

It is certainly true that the program failed to cover the Sports rorts issue, a controversy which I personally consider to be a significant and indefensible misuse of public money for political purposes. Any search will show the ABC’s political reporters covered it extensively and well, but Four Corners did not dedicate a program to it. I will go further and say that I think it would have been an ideal subject for a Four Corners deep dive. But does it seem on the surface that they avoided it out of fear?

In my view, that’s not a sustainable argument given that Four Corners provoked strong anger and criticism from the Government over its coverage of the allegations in “Canberra Bubble” against ministers Tudge and Porter, as well as probing sensitive and difficult issues for the Government in relation to the Ruby Princess and allegations against our special forces.

It is also a difficult argument to sustain when you look for differences of approach under Labor in 2008. In that year, the investigation into corruption in Wollongong implicated the ALP at a local level but there was otherwise very little political content other than a profile of Malcolm Turnbull which I clearly recollect was hardly flattering, and a piece on the end of the Howard era marked by the loss of his own seat.

2008, like 2020, was not without some meaty political issues that could well have merited closer coverage. Rudd was under attack for dismantling the “Pacific Solution” and causing more risky boat arrivals of asylum seekers, while his apology to Indigenous Australians was a genuine landmark. Rudd was also taking a number of steps, some of them welcomed and some criticised, in response to the GFC. And yet Four Corners covered little of these daily political stories.

I would argue that, when you turn a dispassionate and informed eye to the data, it is very difficult to find evidence that the program has changed its behaviour because it is scared of the Government.

On the other hand, it is perfectly reasonable to suggest the program should have covered some issues instead of the ones it did, or that a major story was not given the attention it warranted. Those are all perfectly valid questions to ask or criticisms to make. But to turn this into an assertion of cowardice or systematic bias requires the kind of evidence that I cannot detect from this quick scan.

Finally, if anyone has the time and energy to examine the entire output of Four Corners over the past seven years and compare it with the previous seven years, and then couple that with some kind of dispassionate assessment of the biggest political developments of both eras, you are welcome to. The data is there for all to examine.

Critiquing your public broadcaster is everyone’s right, and it is a healthy and important thing to do.

But it needs to be done in good faith, and with an honest attempt to look for the evidence of wrongdoing in a fair and reasonable way.

If you are starting with a conclusion and then cherry-picking the evidence to fit that conclusion, or if you are only noticing the things that confirm your suspicions rather than confound them, then you shouldn’t be surprised if the public broadcaster you are complaining about is less than attentive to you.

[1] In this case, the ‘ABC’ is Australia’s biggest public broadcaster, the Australian Broadcasting Corporation. It could equally apply to SBS or, depending on where you are in the world, the BBC, CBC, NPR, PBS, YLE, NPO, NHK, RTHK, etc…

[2] I spent 40 years as a journalist in public broadcasting, including several years as the Editorial Director of the ABC, overseeing editorial standards, training program makers on issues like accuracy, impartiality and independence and managing the internal complaints team that investigated allegations of bias and breaches of standards.

This article originally appeared on the author's website here.