South Australian Senator Tim Storer has made a speech in Parliament, outlining the ABC’s importance to Australia, and how political interference against it should stop. 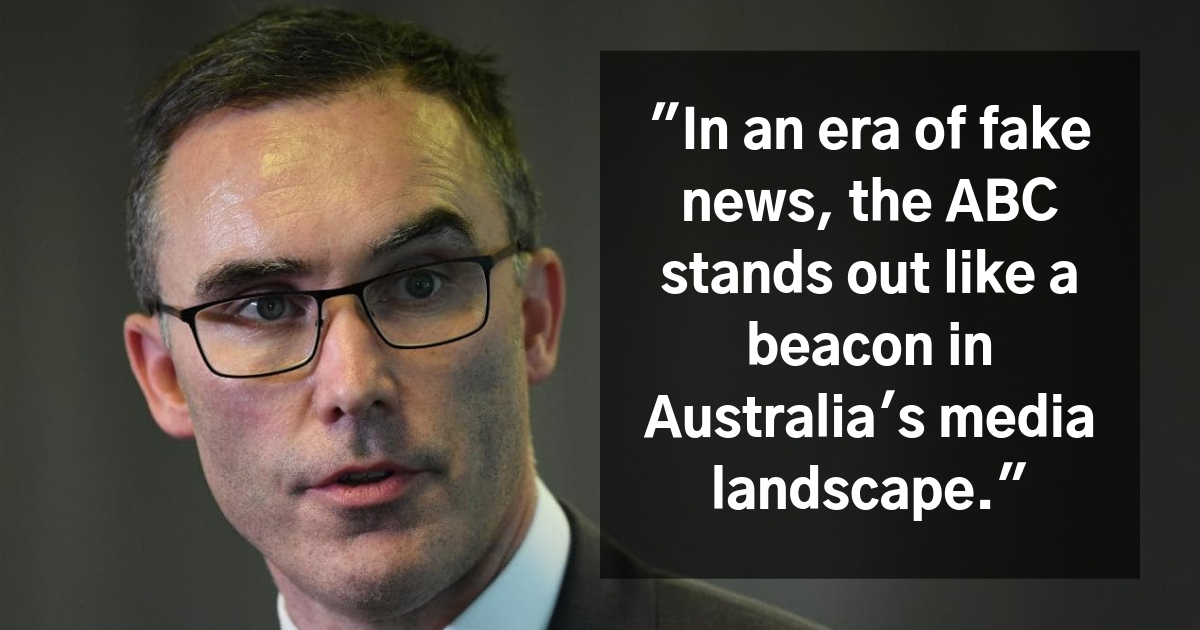 It was a follow-up to the inquiry into political interference at the ABC, which found the government had applied undue pressure on our precious public broadcaster.

Below is Senator Tim Storer's full speech from Wednseday, 3 April 2019.

In an era of fake news, the ABC stands out like a beacon in Australia's media landscape. A public opinion survey by the Roy Morgan organisation is but the latest to confirm that the ABC is by far the nation's most trusted media organisation. For example, the survey found that, while close to half of all Australians—47 per cent, to be precise—distrust social media, just nine per cent distrust the ABC. Eighty per cent of those polled trust the ABC, telling the Morgan organisation that their trust is driven by its lack of bias and by its impartiality, quality journalism and ethics.

Australians expect not only for their ABC to be independent but for the national broadcaster's management and board to protect that independence. The events of last August and September—the sacking of Michelle Guthrie and the subsequent resignation of Justin Milne—at the very least undermine the confidence of Australians that the board and the managing director were defending the ABC's independence. Indeed, Mr Milne has acknowledged that he saw himself as a conduit between the government and the ABC. By his own evidence to the Senate inquiry into allegations of political interference in the ABC, which I participated in, and in interviews, he acknowledged his concerns about the impact on ABC funding of the reporting of some of the corporation's most senior journalists and of triple j's decision to shift its Hottest 100 broadcast.

In 2012, parliament passed amendments to the ABC Act designed to enhance the independence, integrity and transparency in the process for appointing directors to the ABC Board. This government has had a habit of ignoring the spirit of that legislation. Three appointees to the board by this government were not recommended by the independent nomination panel. A fourth was highly rated by the panel but then withdrew from the process, but was subsequently appointed by the minister. As evidence to the inquiry indicated, the approach to appointments by this government may have directly led to the problem centring on Mr Milne and Ms Guthrie. Only one member of the board had direct media experience. None, apart from the staff-elected director, had experience in public broadcasting.

Despite all that and despite the impression of many Australians that the government did put pressure on the ABC on many occasions, the Prime Minister again ignored the spirit of the appointment process, with a captain's pick for the position of ABC Board chair. Ita Buttrose does appear to be better qualified than any other recent appointment. But, in the circumstances, I believe it would have been better if she had gone through the independent nomination process. The fact that she was not approached does not necessarily point to deficiencies in the appointment process. It may well have been a consequence of deficiencies in the approach taken by the executive search firm. This is one reason I readily endorse the inquiry's recommendation to enhance the transparency and accountability of the nomination panel. Equally, I also endorse the recommendation to require the Prime Minister to table a statement advising the parliament on the extent and outcome of consultations with the Leader of the Opposition on board appointments. No process will be perfect, but the more transparency the better, especially in light of the events surrounding Mr Milne and Ms Guthrie.

I would like to take note of the recommendation in this report acknowledging the benefit and desirability of stable funding as a guard in part against political interference. The ABC would like a five-year cycle rather than a three year cycle, and they may well be right. However, I believe it is even more important to guard against out-of-cycle cuts to the ABC budget. Since this government came to office in 2013, the ABC has had its base funding cut by at least $340 million, according to the MEAA. No organisation can plan for its future on that basis. In my view, it would be wise for the national broadcasters, SBS as well as the ABC, to make public their funding requirements ahead of the budget cycle. The government should be required to then respond. That would be no guarantee of certainty, but at least, if there were out-of-cycle cuts, the responsibility and consequences could be well and truly sheeted home. The ABC is the nation's most trusted and valued cultural institution. I sincerely hope that we will never see its independence challenged again by a government in the way we have seen in recent years and that the inquiry we undertook, in which we delivered a majority committee report, will help ensure that this is the case.