Posted in Latest news from ABC Friends on 11 June 2021

Posted in Latest news from ABC Friends on 11 June 2021

The Australian has continued its sustained attack on the ABC, but seems unwilling to publish letters to the editor from anyone with a different view.

Responding to the Greatest enemy of truth is those who conspire to lie editorial in the June 8th edition of the Australian newspaper, the former host of ABC's MediaWatch tweeted his 'surprise' at his letter to the editor failing to be published.

Imagine my surprise when I woke to find that my letter to The @australian about yesterday’s editorial hasn’t been published! Here it is. pic.twitter.com/xtvjRiDMpZ

I mean, seriously: @australian lecturing the media on truth and balance? Please.

In its sustained campaign against the #ABC, The Australian is becoming increasingly shrill. But with such glaring bias it could trash its already-depleted reputation, especially in a war against Australia’s most trusted media outlet.#auspol

Over 80% of Australians (people, not the Murdoch newspaper) value and trust our national, public broadcaster. We ask the editor of The Australian: how does that compare with the Australian readership? 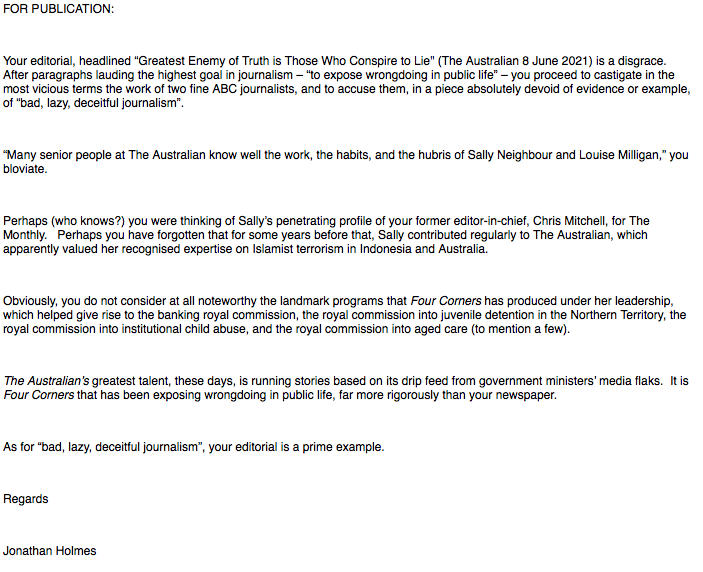