Does the ABC need two inquiries into how it deals with complaints?

Does the ABC need two inquiries into how it deals with complaints?

The ABC is arguably one of the most transparent media organisations in this country, and has always been accountable in respect to complaints concerning broadcast content.  The complaint procedures in place are regularly reviewed, with the current Chairperson (Ita Buttrose) announcing the most recent review one month ago.

To quote - “The review (by the ABC) will be headed by John McMillan, the former Commonwealth and New South Wales ombudsman, and Jim Carroll, former SBS news and current affairs director, who was previously head of news and public affairs for the Ten Network” (announced October 18).

Yet Senator Andrew Bragg has since launched a Senate Inquiry into the complaints handling process at the ABC (ref SMH 14/11/21 p3).  Why are there to be two reviews?  The ABC has already appointed two independent people to review its complaints procedures.  A second, Senate review, runs the risk of politically impacting on the ABC’s critical coverage leading up to the next election; a role that is critical for the health of our democracy.

For an overview of the current situation, albeit from a former ABC journalist (Quentin Dempster), you might want to read the following report - Under fire: Ita Buttrose goes into battle for ABC independence.

ABC Friends is suggesting that if you feel concerned about this (refer to the following for more detail), you could call Senator Bragg's office to offer your thoughts. 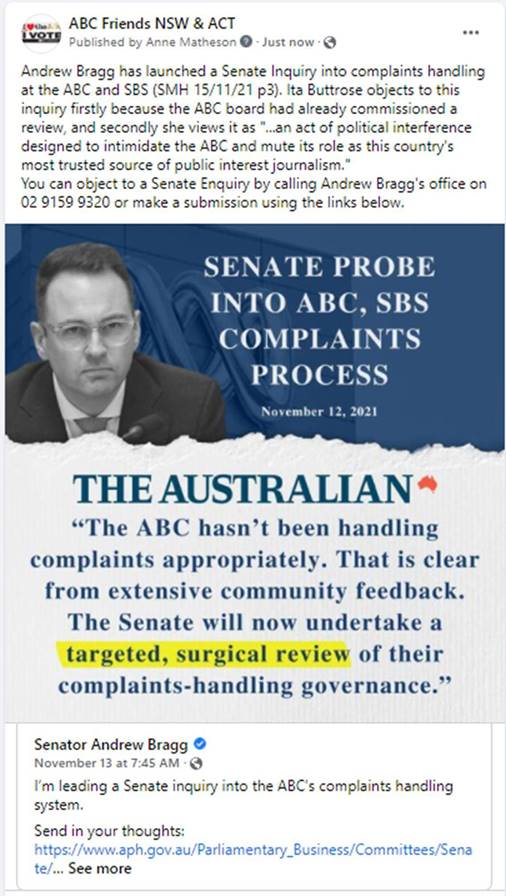 The request from the ABC Friends is as follows:

I demand that our ABC is able to operate independently, without interference from anyone, government or otherwise.  This is an extraordinary attack.  Please rescind this inquiry!

Some other points to make if opportunity allows:

* The ABC is the most critiqued broadcaster in the country, and validly so.

* It should not be subjected to yet another parallel inquiry.

* Is this Senator Bragg ‘grandstanding’?

* Please record your protest as a NSW voter.

* ABC Chair Ita Buttrose has demanded that the inquiry be cancelled.

* This is an opportunistic inquiry instigated while the Greens Senators were at COP26 and could not vote this ridiculous motion down.

* ABC management is constantly being forced to address ridiculous inquiries, stopping them from doing what the ABC is there for. One finishes and the next one starts.

* All Governments are ‘held to account’ by the ABC - it’s what keeps our democracy safe. Think: Obeid just for one.

If this Senate inquiry strikes you as unreasonable, you can either call Senator Bragg's office to object (02 9159 9320) or make an inquiry submission at our Facebook site.